By Andy Baker, with Bill Tyler.

In December 2014, Black Yacht Yacht Club in Melbourne, Australia will be the host for the OK Dinghy World Championship. Over the New Year period just passed, 57 sailors took to the waters of Port Philip Bay to test the waters and challenge for the 2013 OK Dinghy Interdomininon and Australian Championships. World Number 1, Greg Wilcox (NZL) having travelled all the way from Germany took the title for the fourth time, having first won the coveted trophy back in 1983. After a late recovery, Mark Jackson (AUS) ended up on equal points to finish as runner-up, with a consolation of his second consecutive Australian title, while Luke O'Connell (NZL) was a clear third.

The 12 Kiwis and 45 Aussies produced some great racing and the sort of hospitality that the class has become famous for. Nine races were sailed in a wide variety of conditions with only the tenth race being abandoned due to strong winds. It was great to see some new faces in the OK class such as top Finn sailors Anthony Nossiter (AUS) and Rob McMillan (AUS), Impulse National Champion Michael Brown (AUS) as well as some old faces coming back such as former World Champion Peter Milne (AUS).

The event started with light winds with a breeze of 6-8 knots for the first start and, as would become the standard for the entire regatta, the whole fleet were over the line for the first start. PRO Mark Taylor (AUS) went for the U Flag and everyone away without a problem. Following on from his good win in the invitation race Luke O’Connell (NZL) sailed a very good race to lead all the way and went on to take victory. Defending Australian Champion Mark Jackson was the first Aussie coming home second followed by Nigel Mannering )(NZL) in third. Bruce Ashton (AUS) who won the Australian title in 1977 and 1978 showed that he still has what it takes coming fourth ahead of the always consistent Greg Wilcox (NZL) in fifth.

The second race was sailed in slightly more breeze which continued to build throughout the day. O’Connell made an early statement by sailing a near perfect race to take the gun again. Former World Champion Wilcox, sailing in the current world champion Roger Blasse’s boat, rounded first with a comfortable lead. Down the run Wilcox stayed in front, but chose the port gate, where O'Connell chose starboard. This ended up being an error for Wilcox, as O'Connell was on the favoured side of the next shift. To win. Wilcox placed second with 1999 World Champion Peter Milne (AUS) getting up to third in the boat he used in the 1999 Worlds. One of the pre regatta favourites, Mike Williams (AUS), from Black Rock, who finished third at the worlds in the Thailand, was finding the conditions tough, with a sixth and 13th for the day.

The fleet headed out in very light winds and after an hour’s postponement race 3 got under way with the U Flag up. Wilcox led the way and showed that he can be fast in any conditions. He took the win from Brent Williams (AUS) with Jackson in third.

Race 4 was sailed in slightly more breeze but still light and shifty with no more than about 8 knots for the whole race. Ashton turned back the clock and showed that he was going to be a serious contender for the Australian title if the conditions stayed like this. He led at the top mark from Wilcox and never looked back going on to win, with Wilcox second, and another old face making a comeback Phil Dubbin (NZL) sailing a near perfect race in Andre Blasse’s boat to take third. O'Connell continued to make his presence felt in the light winds with a fourth.

After a lay day on New Year’s Day racing was postponed until 2.30pm, when there was a steady, and building, 8 knots. With a bit of tide running for the first time in the series the start was bit harder to judge. With no luck getting the fleet away under a U Flag the PRO pulled out the Black flag for the third attempt. Stechmann got the time wrong and headed off on the one minute gun. He was joined by another eight boats recording a BFD on the scoresheet. A big shift to the left up the first beat sorted the fleet out and again it was Wilcox who made the best of it and went on to take another win. Ashton, who knows Black Rock better than most, sailed another brilliant race to get second ahead of Jackson.

Race 6 started under the U flag in near perfect conditions. The breeze was around 12 knots and the sea breeze was settling in. It would be up to 15 knots by the last beat. Anthony Nossiter (AUS) was starting to show why he has been to the last three Olympics and started well from the middle of the line to be right up there in the lead bunch at the top mark. Russell Wood (NZL) hit the left hard along with Ben Morrison (NZL) and both were right in the mix too. Jackson sailed well down the reaches to get in front by the bottom mark ahead of Wilcox. These two played the shifts well up the second beat extending their lead on the fleet. Jackson went on to take his first win for the series followed by Wilcox and Morrison. 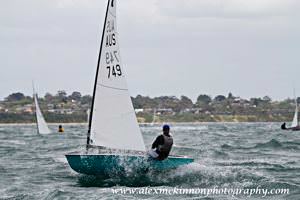 By race 7, it was time for the big boys to shine. It was a perfect Black Rock day, with 12-15 knots blowing from the south-west, plenty of chop and great waves for surfing. Nossiter again started well in the middle of the line and sailed in clear air towards the right of the course with O’Connell. The breeze shifted about 15 degrees to the south and the boats out to the left did well with guys like Stechmann, Michael Horvath (AUS) and Tim Davies (AUS) right amongst the leaders at the top mark. Wilcox recovered from a bad start only to pull the reaching strap out of the boat and fall in backwards at the hitch mark. Nossiter took the lead up the second beat and went on to extend his lead and take his first heat win in the OKs. Williams, sailing in his favourite conditions, returned to the front of the pack finishing second ahead of Jackson. Wilcox recovered to finish eighth, and retain his overall lead. He was now on 13 points after a drop ahead of Jackson on 18 points and O’Connell on 20.

Race 8 was started in a steady 15 knots with the Port Phillip Bay seas building to around 1 metre. Nossiter was revelling in the conditions and led well at the top mark with Williams challenging him all the way. Wood, Stechmann, Morrison and O’Connell were all up in the mix sailing well downwind to keep the pressure on the lead Aussies. Wilcox was well back in the fleet at the top mark but sailed two brilliant reaches to put him back in contention. Nossiter went on to take a convincing win from Williams and Stechmann. Jackson closed the gap on Wilcox by finishing fifth, with Wilcox in ninth, which would end up being his drop. There was now only two points separating the two leaders while Jackson held a strong lead in the Australian Championships and would be almost impossible to beat from here.

The wind was blowing hard out of the west and the swell was huge. The breeze was around 18 knots gusting to around 22-23 knots and white caps covered Port Phillip Bay. Into Race 9 and the PRO wasn’t mucking around. It was straight up with the U Flag on the first start. Everyone was playing it safe with a huge sag in the line. Boats at the pin end got the best of the start with a nice 10 degree shift to the south just after the gun. Morrison started well down at the pin along with Williams and Wood. The breeze was building and a lot of the fleet were finding it tough going in the big seas. Nossiter sailed brilliantly in the heavy conditions and opened up a handy lead at the top mark. The breeze was gusting well over 20 knots up the second beat and the run would prove to be exciting in some of the biggest seas seen on the bay for a long time. There were plenty of capsizes down the run and at the bottom gate. By the last beat the wind was pushing the upper limit and while the tail-enders were in survival mode, Nossiter was powering away for his third win a row. Morrison displayed excellent boat handling to cross in second ahead of Williams. But it was all on behind them for overall honours. Jackson sailed well up the last beat to pass Mannering and get fifth, two places ahead of Wilcox in seventh. They were now tied on 28 points. The AP flag went up on the start boat with the wind gusting well over 25 knots and the seas huge. The fleet headed to shore and waited to see what would happen next. The breeze kept building and around 2.30 pm the last race was abandoned. 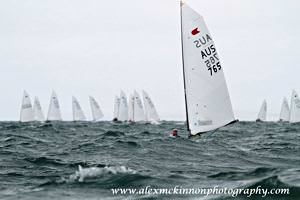 So Greg Wilcox took a well deserved win on a count back from Mark Jackson for the Interdominions Championship, while Jackson took back to back Australian titles. Luke O’Connell sailed a very consistent regatta to finish third just six points behind the leaders.

Anthony Nossiter finished the regatta brilliantly winning the last three races as did Mike Williams with two seconds and a third in the last three. Bruce Ashton found the going tough in the windy conditions on the last two days and slipped out of the top ten but received a rousing applause and standing ovation when he went up to collect his Masters trophy on presentation night.

The Australians regained the Interdominions Trophy after being thumped by the New Zealanders last time in Auckland. There was only two points in it with the top eight from each country counting towards the final score.

What a great event this proved to be. Such consistency from Greg Wilcox and Mark Jackson throughout the week again demonstrating that in the OK Dinghy, time on the water is everything. Boats and gear have reached a very high standard and there is now have a level playing field available to all competitors. As always the Kiwi competitors provided great competition for the Interdominion Teams event. Local favourite Mike Williams found the going tough in the early light weather races but finished the week strongly for his place in the top six. It was great to see the 1999 World Champion, Peter Milne and his crew from the Flying 15, Phil Dubbin, back in the OKs once again. Anthony Nossiter's performance in the final race of the series with wind and sea conditions approaching maximum sailing conditions was very impressive. Current World Champion Roger Blasse is expected to defend his title on his home waters in December and with a strong team from Europe joining the Australasian fleet, the class is looking forward to a great 2014 Worlds at Black Rock Yacht Club.

Not started, not finished, disqualified: 59pts