In winning the 2011 OK Dinghy Inland Championships at Northampton Sailing Club over the weekend of 1st and 2nd October, Nick Craig has become the first person ever to hold the World, UK National and Inland titles.

After the extreme winds and wintry weather for the past three years, the fleet of 27 boats arrived this year to a complete contrast and were greeted by a mirror like Pitsford Reservoir and soaring temperatures. It was a very hot, balmy weekend, and due to the conditions only five out of the scheduled six races could be sailed. Racing on Saturday finally started in 8-10 knots after an hour delay in temperatures approaching 30 degrees.

In race one, Craig started well and for the only time during the weekend led round the first mark. He extended for a big win with Ed Bradburn finally claiming second from defending champion Terry Curtis. But that was about as easy as it got for Craig.

Tony Woods found the best route in the second race and opened up a sizable lead with Craig some way back. However Craig nibbled away, working the boat hard both upwind and downwind and eventually caught up on the second beat along with Alex Scoles. Scoles took the lead down the run, but Craig worked himself into an overlap at the downwind mark to take a second race win. Scoles placed second with Woods in third.

After a late lunch the fleet set out for a third race, though the wind had already started to fade. Starting in 3-4 knots a long port tack leg out of the start to the dam end of the reservoir opened the only crack in Craig’s armour as he struggled to keep height with the fleet. Andy Turner rounded the top mark overlapped with Robert Deaves and the two opened up a nice gap from a very bunched up chasing pack. Deaves took the lead on the downwind and extended to win while Turner got caught by Craig but hung onto third. Ten minutes after coming ashore the wind switched off completely.

Sunday started in much the same way as Saturday with no wind, high temperatures and lots of fluid intake. The wind filled in slightly earlier so the first race got away at 11.00 in 2-3 knots. This was the patchiest race of the weekend with boats pointing all angles to the top mark with first the left then the right and then the left looking good. Eventually Alex Scoles had had enough of tacking and took a long port tack to the shore, and popped out with a nice lead while those on the left were hung out to dry. Once again Craig worked away at Scoles’ lead to pass him on the final downwind and take a third race win, which gave him the title with a race to spare, 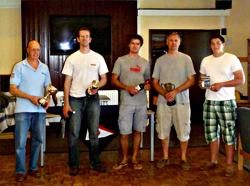 Unexpectedly the wind really picked up for the final race to a solid 15-16 knots, which combined with 28 degrees and hot sunshine was a perfect finale. Again Scoles banged in a corner and led until the final stages when Craig took control to win again. Deaves and Curtis had a battle for third, with Curtis securing third on the line on the final shift by less than a boatlength.

So Craig takes the Inland Championship for the first time since 2002 to add to the National and World titles won in Largs earlier this year. In typical Craig fashion he had turned up with a new unrigged Aardspars mast and proceeded to try and rig it in his own dysfunctional way. This was partially successful, though he ended up sailing with no kicker for most of the weekend, no halyard and the mast foot was held on by nothing more than duct tape. However, the mast performed well and is hopefully early signs that the UK has finally produced a competitive and competitively priced mast. He was certainly seemed to have a speed and height edge over everyone else in most conditions, in combination with his Scolesbreaker hull and a Speed sail. Scoles used his own custom built hull with a New Zealand C-Tech mast and a second hand Quantum sail, while Deaves used a New Zealand Icebreaker with a C-Tech and a Quantum.

Bill Bradburn narrowly beat Andy Turner to Veteran’s trophy after a great final day, while Richard Burton took the youth prize again after picking up some good results during the weekend and placing seventh overall.

After an exceptional weekend’s sailing in tropical conditions, Craig summed it up nicely at the prizegiving when he said, “Who needs to go to Garda when you have Northampton Sailing Club.”