Quite spectacular pictures of the event 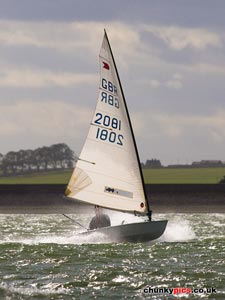 Northampton Sailing Club hosted the OK Inland National Championships during the weekend of the 3/ 4 October. Due to some confusion over the dates the fleet was trimmed down to a competitive fleet of 18.

The fleet took to the water in a full force 5, with force 6 gusts hitting the fleet from above. Many of the fleet spun out on the way to the start with the Northampton rescue crews kept busy from the off. One of the early casualties was Julian Burnham who lost his rig just before the start.

The first start saw Terry Curtis the current National Champion pull away from the pin end, closely followed by Rob Deaves, Tony Woods, and Richard Burton fighting for second. The first reach was wild with the fleet struggling to get their Bows down to the mark. Curtis and Deaves in the increasing wind tacked around the gybe mark and set off for the next leeward mark. The remaining fleet were all having problems with more boats in the water rather than on it. Curtis and Deaves sailed well past the leeward mark before heading up for the wear round.

Woods saw his chance and tacked inside to push for the lead. All seemed fine with this plan until he realised he was now on a dead run rather than a broad reach that Curtis and Deaves were revelling in. Woods was soon sent down the mine for a spectacular wipe out, leaving Burton to take third. Only five boats managed to finish with carbon fibre, plywood and sailcloth floating around the course area.

The second start saw a similar pattern to the first race with Curtis and Deaves showing their high winds credentials by moving ahead of the now depleted fleet. Jon Fish one of the pre championship favourites was called OCS after lap one. Woods held 3rd until the last gybe mark where a swim gave Burton who tacked around the opportunity of coming through.

The third race was held in a viscous squall. The fleet numbers were down to single figures now as they struggled to make headway off the line with mains flogging. Jon Fish managed to reduce his sail area by a third with a ripped main from leach to batten. He joined the rest of the fleet watching from the shore. All the remaining sailors capsized at some point. In a battle for survival there was little race tactics involved with only Curtis, Deaves and Woods managing to finish. After day one there was plenty of boat fixing and recuperation required.

Sunday brought lighter conditions with a gentle 10 knot breeze. The large shifts meant you were never safe or out of the race. Jon Fish made the best of the start and developed a large lead with Curtis chasing hard. Anthony Rich, and Andrew Day broke away from the pack to join the race for honours. Fish lost out to Curtis and also got swallowed up by Rich, and Day.

The last race saw all the contenders at the Pin end, but a large shift after the start gun meant that some new names were contending for the windward mark lead from the committee boat end. Burton got into the lead on the first reach with Curtis escaping from the pin end melee. As the gusts arrived big gains and losses were possible with Woods coming through the fleet to take line honours after Curtis retired. Rich and Deaves had huge last beats to gain second and third. Curtis had retained the championship in extremely challenging conditions.

Big breeze is OK for some

The first day of the 2009 OK Dinghy Inland Championships at Northampton Sailing Club was sailed in some extreme conditions, with winds up to 35 knots and a not insignificant wave height (for a puddle). The exploits of some of the intrepid sailors were expertly captured by these great photos from chunkypics.co.uk.

Pictured here are Terry Curtis (the winner), Robert Deaves (second), Tony Woods (third), Richard Burton (fourth) and Dave Cooper (first breaststroke), all enjoying the OK Dinghy to the full in the extreme weather. Only three boats finished all three races on the Saturday in the windiest conditions that the fleet had sailed in for some years.

However it was good training for the next OK Dinghy world championship, which is due to be held in February in windy Wellington, New Zealand, where current UK National Champion Terry Curtis will be one of the leading British sailors. Interestingly, the Kiwi OK Dinghy fleet held its first qualifying regatta at the Wellington venue at the same time as the UK Inlands and in very similar conditions. However, the Kiwis could only manage to sail two of the scheduled six races because of winds gusting 40-50 knots. One hopes that is not a portent of events to pass in February, despite the venue's windy reputation.