Back to press release list
Downlaod this article, including photo (ZIP, 76 KB) 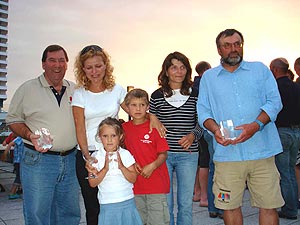 Three of the most influential OK Dinghy sailors from Australia, Germany and Poland were honoured at the championship dinner of the Bombardier OK Dinghy World Championship in Warnemünde, Germany, by being welcomed in to the OK Dinghy Hall of Fame.

This year though, rather than honouring racing success on the water, the class has recognised three individuals who have had a profound influence on the growth and development of the class in these three countries. All amateur classes depend to a large extent on the enthusiasm and dedication of many unpaid individuals, and it can honestly be said that without people such as Bill Tyler (AUS), Norbert Petrausch (GER) and the late Marian Jankowski (POL), that OK Dinghy sailing in those countries would be far poorer as a result.

First, Andre Blasse (AUS) spoke about Bill Tyler on behalf of the Australian Association. Bill has been involved with the OK Dinghy for 37 years and has represented Australia in many International events over the years, not only as a competitor but also as an administrator, holding many positions on state, national and international committees. His list of accomplishments in yachting is immense. Most recently, Bill, and his wife Jan’s efforts in organising and managing the 2006 OK Dinghy World Championship at Belmont, Australia, was recognised by not only NSW Yachting and OKDIA, but all their peers, as the benchmark in the management and co-ordination of international dinghy events.

Bill is also one of three directors of the Clive Roberts Trust Fund that was established in the 1970s to help with the development of Australian OK Juniors. Bill has been able to help send many Australian Juniors to international events over the years, and this has enabled some of them to bring home the Junior World title. Recently Bill also won NSW Yachting's Services to Yachting Award. Collecting his award, Bill was visibly moved by the occasion. He said, “This is a great honour and I very much appreciate it,” before reminiscing about his early days his the class.

Next Peter Scheuerl (GER) spoke. He said, “I have the honour to introduce somebody to the Hall of Fame who has served the class for most of its existence. He owned the first OK Dinghy in Germany in the 1960's and still sails his own OK today. I asked him when he sailed his first worlds, but he couldn't remember, though of course he remembers all the funny stories than have happened over the years. Norbert Petrausch has been involved in the German OK Dinghy Association for over 30 years and has been its president for about 20 years. Once when the class struggled to find a host for a major regatta, he jumped in a did the whole race management with just a few helping hands, even if he would have preferred to sail himself. Through all the years of OK Dinghy sailing in Germany, Norbert has been the steady hand, keeping it all together. Without him, the class in Germany would not be what it is today.”

Finally, Darek Kras, OKDIA Vice-President Northern Hemipshere spoke about the late Marian Jankowski. “Marian was fully devoted to the OK Dinghy class. In fact, if it was not for him, there would probably not be any Poles sailing here in Germany this week. We all owe him for attracting us to the OK. He was among the first OK sailors in Poland and the first National Champion. He first won the title back in 1964 and continued to dominate the Polish circuit for many years. His devotion to the class was demonstrated in many ways. He always had time and energy to encourage new sailors to the OK, help them to obtain gear and tune it. When it was decided that the OK Dinghy was no longer to be a preparatory junior class for the Finn, its existence in Poland was threatened. Luckily, we had Marian. He made sure that whatever gear was in Poland, would be safely put in the hands of those who really needed it. Perhaps his best idea was to attract to the class guys like myself – those who sailed when young and thought of getting back to sailing. He had many friends, sailing friends, like Norbert here. And with their help he helped us get our boats. Back in the 1980s living in Poland was not easy, and importing gear from the West a big task which required a lot of persistence. He took us to regattas in Germany, the Netherlands and Sweden and had seemingly endless reserves of energy and enthusiasm for the sport. He died a few years ago from heart complications, and the OK class in Poland suffered a huge loss, one that we still feel today.”

In the rooftop restaurant of the Kurhaus Warnemünde, Bill Tyler and Norbert Petrausch accepted their awards in person. Bill was competing in his 9th world championships, while Norbert was a very active part of the organisation. Marian's daughters Anna and Magda (who specially travelled from Poland with her husband, OK Dinghy sailor Antoni Pawlowski) received the award on behalf of their late father.