You are here: okdia.org > press > 07 kiwis honour their heroes

Back to press release list
Downlaod this article, including photos (ZIP, 219 KB) 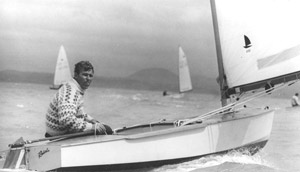 Two of the greatest OK Dinghy sailors ever to emerge from New Zealand were honoured at the weekend at Takapuna Boating Club in Auckland by being inducted into the OK Dinghy Hall of Fame. During the ceremony, Leith Armit (NZL) and the late Clive Roberts (NZL) became the latest names to be added to the ultimate who’s who of OK Dinghy class heroes.

The occasion was a special event organised by the New Zealand OK Dinghy class Association to celebrate the 50th anniversary of the class in 2007. Nearly 70 OK Dinghy sailors from the past and the present came together for a weekend of racing and remembering. On the water, sailors competed for the 2007 North Shore Championships. In the clubhouse they remembered some of the heroes from the past 50 years. 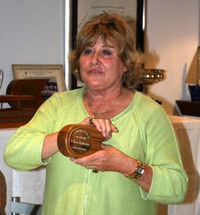 Following speeches by the President of Takapuna Boating Club, Ralph Roberts (NZL) and the President of the OK Dinghy International Association Greg Wilcox (NZL), presentations were made to Leith Armit and to Clive Roberts’ widow, Bev Roberts.

Accepting the award on behalf of her late husband, Bev Roberts was visibly moved when Wilcox presented her with a memento of the occasion. Wilcox said, “The reason this award is going to Clive is not just because he won the Worlds in 1973. It is actually more for his contribution to the class in New Zealand and Australia. Without his encouragement and help the class would never have taken off in New Zealand and neither would have so many Kiwis travelled the world and made so many good friends through the OK Dinghy class. ” 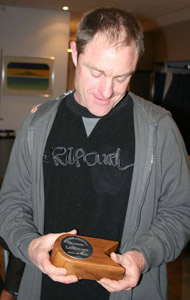 Then Armit was presented with his memento by Wilcox. Armit only agreed to come to the evening as long as he didn’t have to make a speech, so this was a very short presentation. Leith Armit was inducted into the Hall of Fame as possibly the greatest OK Sailor of all time. Wilcox said, “In addition to the four world titles he also placed second (at age 17) and third overall as well. He never really crossed paths with Bo Staffan Andersson (SWE) who also won four titles and would have made for a very interesting match up.” Armit said he was humbled, surprised and very proud to receive the award.

Leith Armit took the world title in 1983, 1985, 1990 and 1994. He also won six New Zealand National Championships and three Interdominion titles. In 1985 he was the recipient of New Zealand Yachting’s Yachtsman of the Year Award.

The OK was designed in 1957 by Knud Olsen (DEN). The OK Dinghy Hall of Fame was established at the World Championships in Poland in July this year, to commemorate the classes half century. At that time Jørgen Lindhardtsen (DEN) became the first class hero to receive this honour. Further heroes will be inducted into the Hall of Fame in the near future.