Carl was born in 1973, the third child to Ray and Di Schmidt and grew up in Black Rock. He attended Black Rock Primary, before heading to Sandringham Secondary College where he first met his future wife, Vanessa Berry. Following high School, Carl started an apprenticeship with Botterill Boat Builders in Highett.

Family friend Gary Sheard was instrumental in Carl taking up sailing at an early age, firstly sailing sabots down the hill at Black Rock. In these early days he would sail anything he could get his hands on. Windsurfing, 420s, and a restoration of an old skate class, put Carl on the water most days of the week at Half Moon Bay in Black Rock. By the age of 13, he had already outgrown the smaller sabot, and followed a few of the older guys into the OK dinghy, a popular class at Black Rock in the late 80’s as it is still today.

His boatbuilding work and natural sailing skills, as well as being pushed by the older guys at the club gave Carl innate boat handling skills that would allow him to become one of the most revered sailors on the Bay in his time. He had won and then defended the junior OK dinghy world championship in Melbourne, and then Denmark by the age of 18, and by the age of 25 had finished in the top 10 at OK dinghy Championships no less than five times, with his best being a 2nd in Adelaide 1998.

Carl had also started sailing Finns by the time he finished up in the Ok’s, and was putting together a campaign for the 2000 Olympics. After tying for first place at the 1996 Australian Championships with the then current Olympian, Paul McKenzie, he had shown his ability to sail at the highest Level. Ultimately though, he was beaten for the one spot available from Australia in the Finn class in 2000.

Alongside his dinghy sailing, by age 17, his sailing skills had caught the eye of one of the legends of yachting in Australia, Lou Abrahams. Since 1990, he had been helming Lou’s boats successfully in Australia and eventually overseas. He sailed with Lou’s Challenge crews over 18 seasons, including 18 Sydney to Hobarts and five boats including the Dubious 40 Ultimate Challenge, the Sydney 41 Challenge again, and Lou’s three Sydney 38’s. Carl helmed the Challenge team to 4 national championships over the years, as well as winning the Sydney38 division of the Sydney to Hobart yacht race twice, and a third overall for the tattersalls cup in 2006.

Following a career change from boatbuilding into electrical engineering, and a move to Queensland, Carl and Ness had settled into a life revolving around the sea, surfing, fishing and cruising with their two Kids, Maddy and Will. Carl is also survived by his mum Di, and her partner, Tim. Carl will be missed by everyone who experienced his big and infectious laugh, and his soft and generous nature. 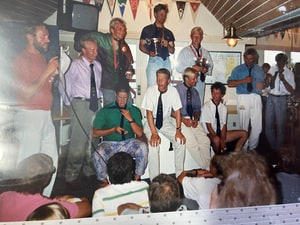 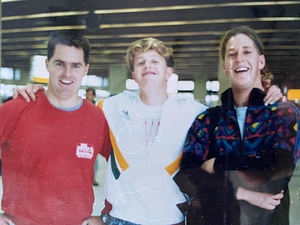