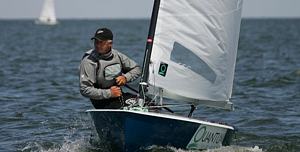 Greg Wilcox (NZL) has maintained his World No 1 status from current World Champion Nick Craig (GBR) as the fleet prepares for the 2012 World Championships, due to be sailed in Vallensbaek, Denmark from 21-18 July.

The recent event at Warnemunde Week produced one of the most competitive events of recent times with 11 of the top 20 ranked sailors competing. This gave them valuable points and caused some changes to the list. It was won by class newcomer André Budzie (GER), a three times Finn World Masters champion, who is also sailing the worlds later this month.

Wilcox picked up second place in at the Medemblik Spring Cup, third in Kiel Week and a fifth in Warnemunde Week, which was also the German nationals. He extends his points lead at the top and now has the second highest points ever after Craig's 1033 points from 2005.

This year Craig won the Spring Cup in Medemblik, placed second at Kiel Week and took third at Warmemunde Week. In an unusual turn of events Craig actually scored some good points outside the worlds and will be looking for good results at the upcoming pre-worlds at Hvidovre, Denmark, and the World Championship to reclaim his no one spot.

Third ranked Martin von Zimmerman (GER) has also had a good season so far, boosted by his runner up position at last year's worlds to rise to third overall while the 2009 World Champion Thomas Hansson-Mild (SWE) in in fourth after winning Kiel Week and the Nordics.

Former world Number 1 Jorgen Lindhardtsen (DEN) is back again with a second place at the Nordics and a fourth at Warnemunde to climb to 14th.

With some 150 boats entered for the 2012 OK Dinghy Worlds, which was made open to celebrate the classes 50th world championship, the next list could see some substantial changes. The Pre-Worlds is being sailed this weekend and will provide a good indicator of form as most of the top sailors are competing.