This years’ regatta at the end of the World produced some of the most unbelievably diabolical weather that most of the competitors had ever raced in. During many of the races, up to five different winds would compete for the affections of the sailors, lulling those who were succumbed into chasing a sure fire winner into desperation and solitude in their own special corner.

At the beginning, everything seemed to be OK and the 21 OKs sailed out of the Napier channel into a beautiful 12 knot sea breeze. But just minutes before the first start, the wind started to back, favouring the pin end by almost a right angle, and giving Greg Wilcox and Karl Purdie a jump on the fleet that they were never to lose. It all turned to custard down the first reach with boats beating, running and reaching all within chatting distance of each other. Boats would get a little puff and catch 15 places, only to lose 15 while other boats caught a puff from a different direction. All credit to Wilcox though, while the rest of the fleet changed places from front to back and back again, he managed to stay in the breeze until the finish and win by a staggering 12 minutes.

Straight after the finish and just before the start of the second race the south-wester kicked in at 25 knots with bullets coming through at over 30. Those who still had the heart for it after the first race blasted round the shortened course. Local hero Adrian Mannering won with Purdie second again.

The first OK race of 2006, race 3 of the New Year Regatta was started in 1 knot of breeze from the land. About an hour had passed before Alistair Deaves rounded the wing mark, some distance ahead of Wilcox and the chasing pack. At this stage the sea breeze put in an appearance making the fleet beat up to the leeward mark and then run down to the windward mark. The breeze then died away again causing the fleet to close up again with the lead passing to Wilcox and then Matt Bismark. Bismark held the lead until the final reach/ beat type leg when he was caught on the wrong side of a returning land breeze. Wilcox won from Deaves and Bismark and with the breeze again dying to nothing, these three had sailed ashore and eaten their lunch before the next boat appeared on the beach.

After protracted lunch discussions about the desirability of doing any more sailing that day, most of the fleet sailed out to race 4 in an unexpectedly stiffening sea breeze. But before any of the fleets could be started the wind had blown from 3 other directions and the postponement flag was put up. At this point the race committee changed the course to be sailed to Course C. Now probably the worst thing to do when this happens, at Napier, is to ask one of the locals what the course might possibly be. And so when the starting gun finally sounded, some of the fleet went upwind looking for the first mark, while others reached off in the opposite direction and the rest wavered in the middle somewhere. When the breeze finally settled in it was from the south-west again at about 20 knots. Purdie won from Wilcox and Deaves.

Reports of a 40 knot front coming through the next day led many to believe that racing would be called off on the Monday, but after a sensible clubhouse briefing in the morning it was decided to hold the morning race and wait for the expected midday front before deciding on any afternoon racing.

So race 5 was a very short affair in a 20-25 knot North-Wester, gusting to 30 at the last wing mark. Russell Wood started to show some form by leading for much of the race, only to be passed on the last screaming reach by Wilcox and Mannering.

We then sat on the beach for 3 hours waiting for the storm. The storm was delayed and the decision to sail one last race was made and the fleets made their nervous ways out to sea. Ominous signs could be seen in the west in the shape of towering clouds with back stuff underneath, slowly making their way towards us. The nor-wester had already started to ease and swing to the north, making another short race something of a follow the leader race. On the last triangle, with the wind almost gone completely, we knew IT was coming. Sudden short lived hot puffs of wind would come from the west, foretelling the doom that was approaching. For the OK fleet it arrived on the last reach, at first at 25 knots, then to 30 by the finish. As we sailed up the channel bullets were coming through at 40 and by the time we made the beach it was blowing a steady 50 knots, making getting up the ramp a wee bit interesting. In the hills is was blowing 70! Anyway, Adrian Mannering won this race. 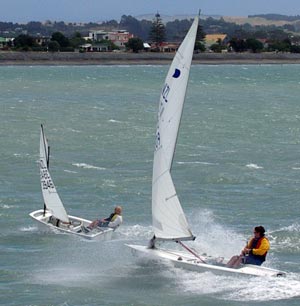 Peter Scheuerl sailing back into the harbour,
the first 40kn gusts are hitting
Overall, Wilcox had won the event with a race to spare, and spent the last race happily taking photos of the carnage from the harbour wall, content in the knowledge that not only had he won the last regatta in the Summer series but also the series itself, by 1 point, from National Champion Mark Perrow.

The containers were packed the next day to take the NZ OK fleet to the 2006 World Championships at Lake Macquarie, NSW in February. With a bronze medal for Wilcox last year, hopes are again high for Kiwi success at this event.

Note: the results at Napier Sailing Club Website are wrong about the last race, so there is only a short list here.
Actually Adrian Mannering won the last race and the places wrere different to the results posted.