Nick Craig's nomination for the 2011 Yachting Journalists' Association Yachtsman of the Year Award is perhaps not just recognition for his outstanding achievements in 2011, but also for his dedication to the sport and his domination of many UK Dinghy classes for nearly a generation, racking up seven world titles and an astonishing 22 UK national titles.

Unlike many nominees for this award, Nick Craig is an amateur, and a quick scan of past winners would indicate that most winners, especially recently, have been professional or semi-professional Olympic or offshore sailors. This perhaps underlines the enormous impact that Craig has had on the world of dinghy sailing in an age when Olympians and professionals receive the bulk of the media attention. He has stood out among his contemporaries as perhaps the best non-Olympic sailor of his generation and even as he approaches 40 shows no sign of slowing up.

In 2011 he won his fourth OK Dinghy World Championship. This is a title that is notoriously hard to win, and which until 2004 had never been won by a British sailor in its 50 year history. He also won his eighth UK National OK Dinghy Championship and sixth OK Dinghy Inland title. Domestically Craig has been at the top of the OK Class in the UK for more than a decade. 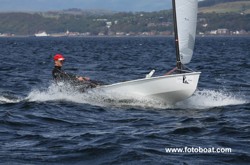 On an international scale he ranks as the most successful OK Dinghy sailor of all time. He has also won National titles in Denmark, Germany and Belgium as well as the European Championship in 2002 and countless other events across Europe.

Also in 2011 Craig won the RS400 National Championship for the fifth time, as well as the D1 Nationals at his first attempt. To cap off an outstanding year he won the coveted Endeavour Trophy, the champion of champions event, for a record equalling fifth time.

His versatility is obvious but it is just one part of his armour. He leaves no stone unturned in his highly analytical preparation and is also an incredibly good tactical sailor, having learnt about the vagaries of the wind at his home club of Frensham Pond SC in Cadets. After a modicum of success he moved up to the more challenging OK Dinghy class, bypassing the offered Laser because he preferred something more technical that he could get his teeth into. That belief in himself translated to his first OK Dinghy Inland title in 1994 and his first OK Dinghy National title in 1998.

Speaking of his nomination, Craig said, “It is an absolute honour to be recognised in this way and to be up against such famous and accomplished sailors as Ben and Dee. To win it would just be fantastic, not just for me but for amateur sailors everywhere, as well as the thriving UK dinghy racing scene, which is probably the best and most diverse in the world.”

Craig never seeks media attention for his efforts, and in some cases even shies away from it, so to be recognised and then nominated for the YJA Yachtsman of the Year is a great achievement in itself, but to win the award would perhaps define the career of possibly one of the best amateur dinghy sailors the UK has ever produced.