There is a new name in OK Dinghy sails, but with a familiar face. Turtle Sails is the new name for Quantum Sails Potsdam. After seven years as part of the Quantum Group, owners Greg Wilcox and Juliane Hofmann decided to go it alone and all sails will now be made under the new name of Turtle Sails. 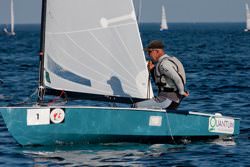 Greg has, of course, been making championship winning OK Dinghy sails for many years, first in Wellington, New Zealand, with Port Nicholson Sails, before moving to Germany and starting the highly successful Quantum Sails Potsdam with Juliane in 2007. He is one of the most experienced and successful sailors in the OK Dinghy class, a former world champion and the current world No 1.

Juliane is arguably the most successful female OK Dinghy sailor in the class, and is evidence that small people (she is under 60 kg) can compete in the OK Dinghy with the correct mast and sail combination, something that Turtle Sails works hard to achieve, and in which it has had great success.

Greg and Juliane also bring extensive experience from other classes to the table, with the combined knowledge benefiting all classes they work with. Greg also sails Finns and Pirats and has sailed J24s successfully. Juliane is the vice European Champion in the Pirat class and the holds the Masters title for the Europe class in Germany. They make championship winning sails for all these classes.

The move to an independent loft reflects their ongoing commitment to provide a quality product to sailors using the experience gained over many years working for a global loft franchise and sailing in these classes. All sails are designed, plotted and made at the Potsdam loft, so new ones can be made exactly the same as previous sails or to the latest design, depending on preference. 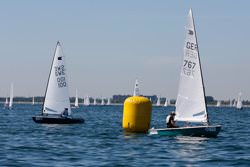 The results speak for themselves. Greg has been building winning sails for more than a decade. Their OK Dinghy sailors have won the world title in 2002, 2008, 2009, 2010, 2012 and 2013 (with a partial inventory) as well as countless national and local events. Each year their sails win more major events than any other sailmaker and continue to be the loft of choice for more top OK Dinghy sailors around the world than any other sailmaker.

What gives Turtle Sails that extra winning edge is the attention to detail, combined with more than 20 years of OK Dinghy sailmaking know-how. Each sail is individually designed and tailored to suit each sailor's rig, weight and sailing style. The result is a high-performance sail that can be adjusted through the wind strengths to provide a finely tuned engine for your OK Dinghy

The results from 2013 include:

Already in 2014 their sails have won the Australian Nationals and the Interdominions in Melbourne.

Greg and Juliane look forward to working with their existing customers through 2014 and well as welcoming many more new ones. Find out what all the fuss is about in 2014 and switch to Turtle.