Last weekend an OK Dinghy gathering was held in Seattle, USA, the home of OK Dinghy sailing in the United States. Axel Damgaard Olsen, the inspiration behind the OK Dinghy moved to Seattle from Denmark in the late 1950s and started the first OK Dinghy fleet in the USA.

Present at this gathering was Axel's widow Gudrun (93), who was presented with a copy of 'Completely OK' by long time OK supporter and sailor, and host of the reception Jerry Elfendahl.

Jerry wrote, “On Saturday, August 30, the "Completely OK" gathering honored Gudrun and the contributions that she and her late husband, Axel Damgard Olsen, made to our lives and the camaraderie which we shared sailing OK Dinghies, Optimist Prams and Mamu sailing dinghies and continue to share almost fifty years later.” 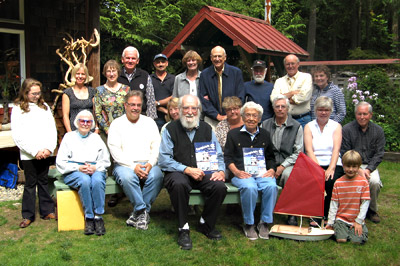 The editor of 'Completely OK' Robert Deaves sent this message to the reception and Gudrun in particular, "I hope you enjoy the day and derive much satisfaction from the fact that thousands of sailors across the entire world have enjoyed and continue to enjoy building, sailing and racing the OK Dinghy. I sent a copy of the book with a similar message to Knud Olsen with the thanks of all OK sailors everywhere. In the OK Dinghy many sailors have found the main focus for their sailing and social lives. It it a great tribute to both Axel and Knud that it has survived so strong to this day. Long live the OK (and please everyone buy a book!)"

Jerry also wrote, “We learned of the passing last year of 1960s OK sailor Howard Herrigal. We also learned that US OK #1 sailor Scott Gilson had knee replacement surgery last week - he called to say he was physically unable to attend and to give everyone his best! - and then cheered when, only a little bit late, he arrived at the gathering! He helped Gudrun and Axel when they first arrived from Denmark in the 1950s.

“We learned that one of the three 1966 US OK Dinghy National Championship trophies designed by artists of the Bainbridge Island OK Dinghy Fleet members sculptor Bud Johnson, carver Garney Quitslund, Henderson and Elfendahl is still on the Island. Two of the trophies were won by top two finishers from San Diego - Brian Thomas and Craig Greaves. The third place trophy went to Harry Larsen of Seattle and Vashon Is. Harry describes it as "the most beautiful sailing trophy (he'd) ever seen" and following the passing of OK sailor Bill Hey, US 191, in 1977, he allowed the trophy to become Port Madison Yacht Club's "Bill Hey Memorial" trophy awarded to the PMYC member for "greatest contribution to boating." First recipient was Tom Henderson in 1977. Dan Taylor, who coordinated the building of 18 Optimist Prams was recipient in 1998.”

“I know this reception came without much prior notice and fell on Labor Day holiday weekend when you were or could have been elsewhere. Thank you to Owen Winter for bringing Gudrun over to the Island on the ferry. And, oh, the stories...keep them going. Doesn't it seem like we need an OK Dinghy Senior Racing Division??”

“I remember Axel describing his "perfect yacht club" - a barge on the water with a hot plate for cooking hot dogs or soup, a cooler for beverages and the barge being the starting line for multiple races. Maybe we ought to add a wood stove and a few easy chairs for story tellers! Sort of sounds like PMYC to me!”

“Axel also said, “The Danes may have the best sailors, but the Brits write the best books on sailing.””