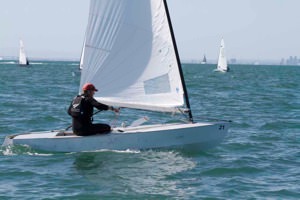 Yesterday we brought you some of the interview with Matt Stechmann (NZL), who won the OK Dinghy World Championship at Black Rock YC on January 4 after a week of unusual and confounding weather. Here is the complete interview, taken shortly after he came ashore after claiming the title.

He is the seventh Kiwi to lift the title since the event started in 1963 and far exceeded his own expectations. “I am absolutely over the moon to be honest. My goal for this regatta was top five, I thought that would be a good effort here and just to really focus for 2016 worlds in 18 months times. I am just stoked about this.”

“I was quite confident that I could perform good enough today to give myself a chance. But whether I woke up this morning thinking today I would win the worlds, the probably not. I was confident I could put in a good display and let it all unfold.

“The first race went incredibly well and I got a good start just up from the pin and managed to get over the little bunch to leeward of me which really gave me the leverage to sail the way I wanted. I could go low and quick to the left hand corner and we got a shift which popped us up into a nice lead with a few other boats. Though Greg [Wilcox] and Luke [O'Connell] still had good races, that really set me up to hold all the cards for the final race.” 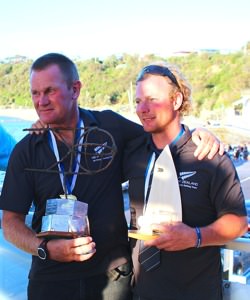 “I always knew I had the biggest drop, so my game plan for the final race was just to stay close to Luke and shadow him round the track and see how the cards fell. There are so many good guys out there, you just had to sail your own race but Luke and I pushed each other hard to be in the top bunch, and on the line there was just one boat between, and that was enough to give me the one point lead.”

Like everyone else he was frustrated with the poor weather conditions over the week but just got on with the job in hand. “It's unfortunate that we only sailed five races, but you just have to deal with what's in front of you. I was aware it was only going to be five races and I wasn't going to let it phase me. I was just taking it one race at a time and not doing anything silly. In the past I've been known to roll the dice a little bit too much, and be the architect of my own demise.”

“I was confident with my speed. I wasn't blindingly quick but I was fast enough to implement the plans I wanted to do. I could get into the pocket of the fleet and sail my lanes which made life a lot easier. My downwind speed has been good this week, which is great as I have been working on that a lot.”

“I always felt that one day I could win the OK Dinghy worlds, but to do it here at Black Rock is quite special with Rick Dodson winning here and Leith Armit as well. Mike Wilde (NZL), our esteemed Vice-President, was concerned that none of the Kiwis could step up and knock it off. It's just good to put my hand up and say, yeah, well let's take that on and get it done. I am rapt.”

“I am absolutely thrilled for Luke. We work together and we're pretty tight. We do a lot of training together and we have the woody boat thing going, and as I said to him earlier, 'Look mate, your day will come. You'll win more worlds than the rest of us put together.' His day day will come but I am absolutely rapt that if I had to go toe to toe with someone it would be Luke. Could we have planned it any better? Probably not.” 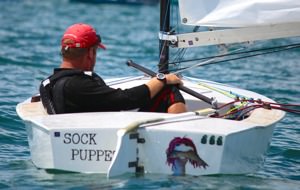 What is next? “Back to work on Tuesday for Artemis. I fly back into Christchurch and get on a plane to Wellington to do some work in my factory and then I've got to go to Auckland to get some Artemis stuff done for later in the year. No rest for the wicked.”

“We have a big year with Artemis this year, so there's a lot going on there. Hopefully I'll get a bit more OK Dinghy sailing done later in the year. Unfortunately I won't be able to go to Poland in July to defend my title, because I have quite a few clashes going on but I will definitely be at the worlds in 2016 for sure.”

“Nocka [Anthony Nossiter] and me are pretty keen to take our OKs to San Francisco, but I am not sure how much time I will be spending there in the near future. That's to be decided. But we've certainly talked about it. We get a hard time from a lot of the boys there because they are all into the Moths.They say we should be foiling but we like the gentlemanly sailing. Nocka is into it and with Rod Davies now being there we'll certainly have to twist his arm and see if we can get something going on up and there do a bit of tuning.”

In summing up he said “It's been a good week, but pretty difficult for the race officer. He's done a great job with what he's had and at the end of the day, with the weather he has been dished up with we should just be happy to just get away with the event. It could have quite easily have gone the other way and we'd all be standing here twiddling our thumbs right now.”