Pictures and more info in swedish on the events homepage: www.umss.se/oksm2008 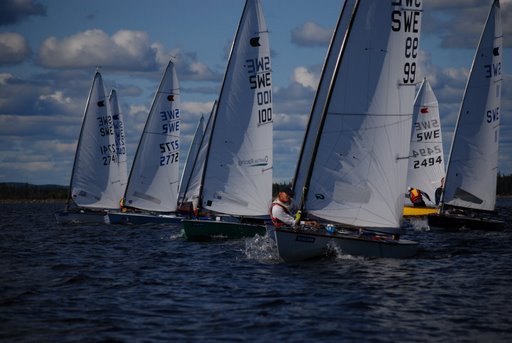 This years nationals were held up in Umeå where the local fleet had put up an excellent weekend with sunshine and variable winds. That together with a hot natural wooden sauna and a cold one after the long days at sea made the regatta well worth going to. The long sailing to the racearea was like Kielweek but not as long as Poole many muttered.

The fight over the title became not so exiting and Thomas Hansson-Mild took every single race he competed in. Thomas who sailed on his homewaters looked very confident and spent most of his time alone. The last day he sailed the first race, won and secured the title, and then went further in the bay to watch his daughter Maja sailing in the optimist races.

The silver- and bronzemedals where tighter and there where a quest between Jonas Lindahl, Karlskrona SS and Hans Elkjaer, Varbergs SS. After three days It all stod down to the last race where Hans had a four points lead going in for the last race. Jonas had to win the race and have Hans on fourth ore worse in order to take the silver. Going in the race and at the final beat Hans looked to be the winner with Jonas lying second and himself at a fourth place. But the leader Per Jaensson accidently finished between pressboat and finishing wessel instead of flag and finishing wessel, making Jonas the winner of the race and Per managed to secure third place and therefore Hans ending at fourth. So this making Jonas taking silver and Hans bronze.

Jonas Lindahl is finally back from a troubleing kneeproblem that have spoiled the last season and almost all this.
"-This was a good receipt to get from hours of rehabtraining" said Jonas.