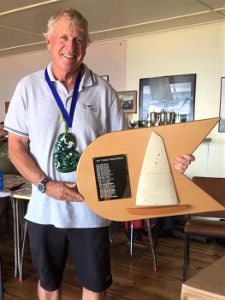 After so many events had to be cancelled this year, it was with much relief to the fleets in Napier, Waitara, Wellington and Auckland that they could finally get back to the wonderful Turangi YC to race under the welcoming team of Wally and his fantastic group of volunteers.

A few sailors arrived early for a sneaky Friday training session before the rest of the fleet arrived later in the day to see what type of rum was on offer and to enjoy a catch up with their mates from around the country.

Saturday dawned with a perfect reflection of the surrounding hills of lake Taupo, but finally the breeze arrived with Wally determined to get plenty of racing in.

Race 1 got underway in an unsettled breeze with Rod Davis hitting the front and he lead the way throughout the race to held off Alistair Deaves and Mark Thirkettle who were working hard to close the gap. Race 2 took a general recall to get the fleet to settle down after a right shift in the start sequence and by the time the fleet got off cleanly it was Rod Davis again showing his transom to the fleet and he held off Mark Thirkettle, Steve McDowell and Adrian Coulthard at the finish line.

The wind backed to north again for Race 3 and Rod Davis opened up a sizeable lead by the end of the first downwind leg with Mike Wilde and Steve McDowell rounding off the top three at the finish. Race 4 was held in more pressure and a bit more hiking was going on especially by the racing snakes in the fleet. Not knowing how many races were going to be held, the fleet was very motivated to earn the day’s Tiki and in some of the best sailing breeze of the day, it was Steve McDowell with a superb first beat who took the bullet ahead of Rod Davis, Mark Thirkettle and Michael Shannon.

The fleet had read the wind forecast for Sunday and Wally was rightly keen to get a 5th race in to guarantee a good series. With a lovely breeze, beautiful surroundings and almost no tired legs, the 5th and final race got underway. Already feeling a bit quick, Steve McDowell hit the start line with speed and didn’t look back once to rightly earn the day’s Tiki, ahead of Rod Davis and Mark Thirkettle.

Sunday dawned with the same glassy lake, but this time with an hour change to cope with and less wind to go with it. After some worthy banter about boats, Jacinda and Putin, the fleet was coaxed off the beach and in to a very light breeze which was still deciding on a direction from which to blow.

After some head scratching, Race 5 finally got underway, although for a few minutes it was pretty hard to tell that, other than the start flags had gone. With the fleet splitting up the beat, it was anyone’s game as to which side would allow meaningful forward movement to the mark. Unfortunately for the rest of the fleet, it was Rod Davis’s game and he lead around the top mark followed by Alistair Deaves, Mark Thirkettle and a hungry pack of Mike Wilde, Grant Simmonds and Rob Hengst eyeing up a passing lane for the Tiki. The downwind leg slowly turned into beat and the race team shortened course before anarchy set in. Keen to reduce the amount of chalk being used on his scorecard, Rod Davis kept his nose in front to once again take the race, the event and more importantly the Tiki trophy.

Congratulations to Rod who gave a great display of consistency in what were very testing conditions and frankly being able to discard a 2nd was just rubbing it in.

Congratulations also to Wally and his team who epitomize what a sailing club can achieve with such a friendly and welcoming team of volunteers who make each and every visitor feel at home and keen to return. Return we shall, for the Turangi Internationals 2023.