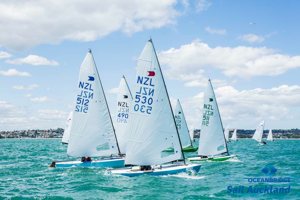 Over the weekend the OK Dinghy class took part in Oceanbridge Sail Auckland 2014, New Zealand’s premiere dinghy racing event and a Grade 1 ISAF fixture. With 33 boats entered the OKs were the largest fleet at the event and as such enjoyed prime position for their boats directly in front of the RAYC clubhouse. A great showcase for the OK fleet, and a chance for the yachting world to see grassroots sailing at its very best alongside the Olympic classes. With the whole OK fleet working hard on their sailing, and 10 having recently competed in the OK Interdominions in Melbourne, the standard of racing right through the fleet was higher than ever, with torrid action on the water and great camaraderie off it.

Day 1 was a beautiful sunny day, with an extremely shifty, unpredictable southerly (veering between SW and SE) blowing from St Heliers out across the water and onto the B course, where the OKs were to race. Throughout the day the wind shifted wildly and veered up and down between 5-15 knots, and everyone was thoroughly tested during the day’s three races. 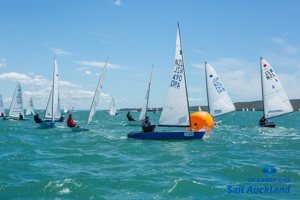 Jake Weeks at the mark

Just before the start of Race 1, the wind swung hard to the left and most of the fleet set off towards the pin end of the line, where they quickly piled up, ran out of breeze shortly after the start and had to rethink their game plans. All except Miles Addy who had apparently been sleeping in his cockpit at the committee boat end until the start gun went, banged the right hand corner and came out half a leg in front – a sensational opening gambit. And he hung onto it until the final two legs, when the shifts and the downwind were his undoing, eventually crossing the line in seventh. In the end, Luke “Colt” O’Connell sailed an excellent race to take out race 1 followed by Kagan Weeks, Matt Stechmann, Nigel Mannering and Rod Davis.

In race 2 the breeze freshened and with the water still flat, the power sailors came into the game. Brad Douglas, back in the class for the first time in almost two years, and sporting a brand new rig and sail, sailed well beyond expectations to take a big win ahead of Russell Wood followed by Matt Stechmann, Ben Morrison and Alistair Deaves. Race 3 was very similar to race 2, and once again Brad Douglas stamped his authority on the race, taking an excellent victory, followed by O’Connell, Morrison, Wood and Stechmann.

So after Day 1, Brad Douglas had shaken up the fleet and put one hand on the gold medal, with Stechmann in second, O’Connell in third, Morrison in fourth and Wood in fifth. The points from 1-10 were very close and it was all there to play for on Day 2. 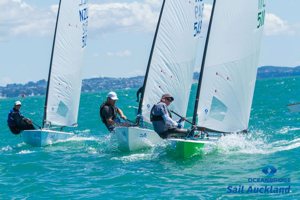 At this point the OK fleet who had gathered in front of the RAYC clubhouse to enjoy some cold beers and celebrate some good performances, tell exaggerated stories about the day’s thrills and spills and, most importantly, salute the winner of the mighty Tiki, who by rights was Brad Douglas, winner of the day’s final race. Yet, when the Tiki was produced for the ceremonial powhiri and formal presentation, young Mr Douglas was nowhere to be seen, having left the premises. After a shocked silence, the angry muttering began, and soon grew into a roar of outrage as the very structure of OK society was torn asunder, sullied and despoiled by this disgraceful act. Soon the chant of “Utu!” could be heard ringing around the fleet – and not just in New Zealand either. It wasn’t long before the news leaked onto the internet, and OK sailors all over the world began voicing their displeasure in online forums. Eventually, order was restored, Big G was restrained from taking his gun and going in search of the culprit, and it was decided that sentencing would be delayed until the OK elders have had an opportunity to consider Mr Douglas’ actions objectively, as against the long and sacred tradition of the Tiki, and pronounce judgement. One thing was known to all, however: the Tiki is tapu. If you disrespect it, bad things happen. Day 2 was still to come…

On Day 2, everything changed. As the fleet made its way back out to do battle, a light nor-easter began blowing – usually a sign of a good steady breeze to come, but as the OK course was situated directly south-west of Rangitoto, that was not to be. After an hour or so of drifting round, the wind settled (sort of) back into the south-east and race 4 was underway in a very light 5 knots of extremely variable wind. A big bunch soon headed out to the left and under Rangitoto, where it looked like there was good pressure – or was that just sun on water? A much small bunch spread out and sailed up the middle of the course, while four boats (Deaves, Jake Weeks, newcomer Eric Rone and elder statesman Joe Porebski) sailed all the way to the righthand corner and came back with height and pressure to be absolutely famous at the first turn. Morrison rounded in fifth behind Porebski, followed by Davis, O’Connell and Kagan Weeks all going very fast in the light airs. Deaves is well known for his extreme skill in light air and soon took a stranglehold on the race, sailing away for a big win, followed by Jake Weeks with an excellent second, Morrison in third, O’Connell in fourth and Kagan Weeks in fifth. Those Weeks boys are looking very dangerous in the light air, and it's great to see them climbing up through the fleet and improving with every regatta. Overnight regatta leader Douglas went left up the first beat and was punished for it, just managing to scrape into 11th – and, looking up at the dark and brooding heights of mighty Rangitoto, one could not help wondering whether the gods of the Tiki hadn’t reached down from those very heights and snatched the breeze from the left hand side of the course.

Race 5 didn’t get underway for another 2 hours as the wind veered into the nor-east and gradually strengthened, and the course was moved to the west to get (partially) out of the shadow of Rangitoto. With a king tide running, more pressure on the left but the breeze lifting on the right, the racing was always going to be difficult and there was a lot of head scratching going on. O’Connell was taking no prisoners this time and soon jumped out ahead of the fleet, eventually sailing away for a big win. Behind him a big bunch rounded the top mark together and blasted down the reach before rounding the turning back and heading down the first flat run and into a dying breeze. Anything could happen. A big bunch headed straight for the mark and Stechmann dived deep down to the right and uptide. Predictably, when the bunch neared the bottom and began fighting the tide to get to the mark, Stechmann came steaming into second place behind O’Connell, both of them tacking immediately and heading away on starboard. The big following bunch (Deaves, Wood, Davis, Morrison, Kagan Weeks, Jono Clough) rounded together some way behind, with Morrison tacking early while the rest put in a short hitch. The breeze rapidly built from there and swung hard to the right, turning the beat into a starboard lay-through and cementing O’Connell, Stechmann and Morrison in 1, 2 and 3 which is how it stayed to the finish, with Wood and Deaves rounding out the top 5. Once again Douglas failed to fire, with an 11th, effectively ending his hopes of a regatta win.

Race 6, the final race of the contest, began in a continually freshening sea breeze, with the tide having just turned and a vicious chop kicking up making boat speed difficult to maintain and therefore crucial. Deaves executed a perfect start and picked the first shift to power into a solid lead, rounding the first mark handily ahead of Rod Davis and Curly Salthouse (another late charger, having made drastic rig changes over night), with a big bunch following close behind. Davis sailed brilliantly to pass Deaves down the run, and sailed a superb final beat showing excellent pace and stamina to round the final weather mark with a solid lead and just a run and a reach to go. Davis would admit later that, heading down the run with a big lead, the thought that he may very well be about to claim his first Tiki crept into his mind. Tiki fever is an affliction known only too well to New Zealand OK sailors, and we were about to see that even double Olympic medallists are not immune to this destructive disease of the mind.

Meanwhile, Morrison and Douglas had charged hard up the beat, sailing through the pack and rounding the final turning mark with Morrison slightly ahead of Douglas. Davis was well ahead and headed sensibly down to the right hand side of the run, uptide and sailing conservatively in the vicious seaway which was growing by the second as wind and tide increased. With a reasonable gap back to fourth, and the wave angle being slightly left to right, Morrison and Douglas both gybed onto port and headed left, and a torrid battle ensued with both sailing fast and loose to try and secure second spot. Halfway down the run, it became apparent that Davis was no longer quite so far in front, and suddenly the race for the Tiki was on for young and old. By this point, Davis was committed – there was no coming back across to the left hand side in time to stop the chasers, and he set his sigts on the mark and went for it. Meanwhile, Morrison and Douglas had good pressure and were pelting down to the mark by the lee. With 10 boat lengths to go, Morrison and Davis came together and a final wave allowed Morrison to draw level on the inside – all he had to do now was make it to the mark without gybing, as the sail was flicking dangerously by now. At three boatlengths the call of “buoy-room” rang out and an anguished howl, came from NZL 511 as Davis was forced to steer wide and allow Morrison to round inside and head off on the tight reach to the finish and Tiki glory. Meanwhile, O’Connell now had to make sure he finished sixth or better in order to take out the contest – as he has done so often this season, the young fella soaked up the pressure like a seasoned pro, smashing the run to climb to fourth and take out the contest by just 2 points ahead of Morrison. With Douglas third in the final race, Stechmann also had to perform right to the death to stay on the podium, which he did as well, coming in sixth to pip Douglas by one point for third overall.

After racing the big black boat of John “JD” Douglas met every single competitor and handed him a cold beer to enjoy on the sail home – there is nothing better after a hard day’s racing than that.

Big thanks must go to RAYC for hosting a great event, to Brett Linton for doing a good job as PRO in difficult conditions, and to all the out-of-town OK sailors for making the effort to travel to Auckland and be part of the action. Congratulations to Luke O’Connell for a fantastic performance in winning the event. Next stop on the NZOK Tour is Lake Taupo for the 2014 Turangi International Open on 15 and 16 March.