10 UK sailors travelled to Medemblik for the 2005 Spring Cup regatta to make a total fleet of 23 boats from 4 countries with many of the leading contenders for this summers Worlds Championships in Denmark there to see if their winter training had paid dividends. Despite the distance, this event is highly popular with the Brits because of the incredibly efficient race management, friendly club and decent local nightlife!

The OKs were racing with J24s, J22s and Max Fun 25s guaranteed to spice up the proceedings! 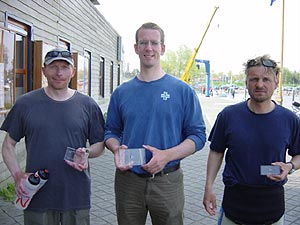 Day one saw light and shifty conditions with force 0-1 winds: Neil Goodhead and Nick Craig had a good day - Neil won race 3 and Nick race 2, while the first race was won by Oliver Gronholz (GER). At the end of the day Nick led from Neil with young Alex Scoles 3rd Brit (5th overall).

Day 2 was also light and sh*te. Ulf Brandt (DEN) took race 4 and Nick Craig took races 5 and 6. Anthony Rich came 3rd in race 4, having led round the first mark and tussled for the lead throughout the race. Julian Burnham enjoyed a day in bed after a heavy session at the end of day 1.

Day 3 was bright, sunny and force 2-3. Nick Craig got a pair of firsts and Terry Curtis had a much bigger smile as the wind picked up. Overall, Nick took the trophy with 5 wins from 8 races , Ulf Brandt was second and Andreas Pich (GER) third. Neil Goodhead finished up fourth.

Nick Craig and Ulf Brandt showed that they're on the pace for the Worlds later this summer in Denmark: Ulf looking particularly good in light weather.

Next event on the International OK calendar is Kiel Week in June whilst the UK fleet are heading to Highcliffe and Frensham Pond this weekend, showing there is racing to suit everyone in the OK class.