27 OK’s from the corners of England and one visitor from Ireland descended on Northampton Sailing Club 29/30 September.

The weather gods were looking on favourably as the fleet were greeted with glorious sunshine and 15mph winds on the picturesque Pitsford Reservoir.

In race 1, Ed Bradburn shot away at the start along with Jon Fish and Lee Child but the crafty Jim Hunt worked his way through the field, lap after lap sneaking in from the left at the windward mark and it was ultimately Jim who stole the win from Fish after many downwind luffing battles between the top 4. Andy Turner stayed out of trouble and came home 5th.

Race 2 got underway at the second time of asking after a very clear general recall saw the race officer get the black flag out rather than watch endless recalls. Bradburn again always seemed to be going the right way up the beats but it was Hunt’s ability to avoid the snakes that gave him the second win from 2 races which was a clear signal to the fleet! Curtis came home second.

Race 3 was a bit lighter and saw some different faces out the front. Antony Rich led for much of the race but was overhauled and ended 5th but deserved to have been higher. Adrian Hollier kept it together and ended 3rd but it was Tony Woods who sniffed out the shifts best and impressively picked his way to get line honours. 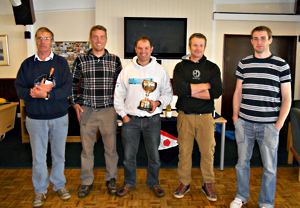 The highlight of Race 4 was Curtis trawling for weed as he got a bit close to the bank which slipped him back down the pack. He didn’t learn from his mistake on the second lap and after getting so much weed stuck on his centreboard that it wouldn’t come out again, he decided enough was enough and went back to the club for an early cuppa. At the front Hunt and Child had a sizeable lead by the final lap and the result went the way of Hunt after a tacking duel on the final leg. Bradburn again put in a solid performance in third.

Day 2 dawned and people dragged themselves shivering out of tents and cars. Thankfully the full English breakfast and endless cups of tea got the competitors ready for the days racing with a forecast that was set to build all day.

Race 5, Child won the favoured pin end and managed to lead from start to finish whilst the race was much more interesting behind. After numerous place changes behind, ultimately the consistent Curtis snuck into second place by half a boat length from Fish at different ends of the line.

Going into the final race, Jim was leading by one point and with Curtis preferring the fresher conditions it was going to be an interesting finale to the Championship.

Race 6 blew up with 25mph gusts fanning down the lake from over the dam by the end of the race. Anyone who didn’t swim at least once deserved a medal and even Robert Deaves had an unplanned hull inspection on a tight reach which was his first capsize for a couple of years! Ultimately the race win went to Curtis and with Jim in 3rd was enough for Curtis to take the title by one point from Hunt. Child and Fish were tied on points but Child took 3rd on countback and Bradburn was 5th.

Northampton SC should be very proud for putting on a well-run, friendly event both on and off the water!