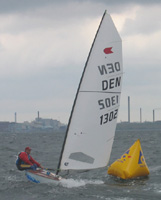 23 sailors from Denmark and Sweden turned op for this years Nordic Championship. It was going to be a heavy weather venue, fortunately the weather was grey and we had some rain as well.

The wind was averaging 20 knots and they measured above 30 in the puffs. In those conditions you would expect experience in the OK to count, but it was the former swedish laser sailor Jonas Quist who took the title. It was his third time in the OK, and he showed some good tactics and very good downwind speed, which eventually gave him the title.

Just after him we saw Jorgen Lindhartsen, who apparently have forgotten his back injury and is back in very good shape. El Presidente got third, but in the first two races when the conditions were ruff, he was convincingly fast.

Before the regatta Jesper Petersen was telling some newcomers that in the OK-class, that even in the worst conditions, his slogan was "Gibe or Die!!". However Mr. Petersen chose death himself quite a few times. If he quit the swimming lessons in time for the worlds, he as well, will be a strong contender.