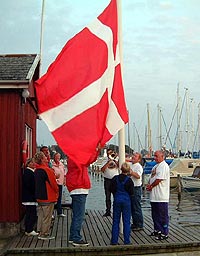 In light conditions the two races of the first day were somewho tricky. Jørgen won the first, but was unlucky in the second. So Karsten takes leadership over. In the evening there was a fantastic barbecue with "self service", which was a lot of fun.

Second Day
Very foggy weather in the early morning, so we were very unsure about, if we will sail today. We went out in very light air, which increased on the way to the start. Both races saw a close "match race" between Jørgen and Karsten with a lot of tacking and both times the "old" man won. Is he? I remember Karsten very irritated about this. Again the evening brings a realy fantastic dinner, which was one of best organized i ever saw. Very friendly people there :)

Third Day
The final day again saw some more wind then the one before. Karsten was happy with this and finishes two times first and so finaly Karsten won the regatta, but Jørgen own the titel. My congratulations to both.