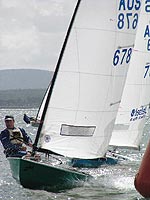 The 2005 Australian Championship for the International OK Dinghies was conducted at Belmont, Lake Macquarie, NSW over the Easter long weekend. The 42 entrants for this event included 5 Masters, 12 Veterans, 3 Juniors and 1 Lady competitor. Entries were received from 5 States with 2 competitors from SA, 2 from Tasmania, 1 from Queensland, 13 from Victoria and 23 from NSW. Mark Perrow also came over from New Zealand to compete in this contest. Thanks to all competitors who made the effort to travel great distances for this Australian Championship.

The event was organised by the International OK Association of NSW Inc. and hosted by the Belmont 16ft Sailing Club. Valuable sponsorship support was received from Zhik with product donations of competitors' gloves and prizes for the Championship. Our thanks are extended to Brian Conolly from Zhik for this very welcome support.

Thanks also are extended to all of the volunteers who contributed to the success of this regatta.

In particular the Regatta Manager, Luke Hughes, worked tirelessly in the lead up to the event and over the weekend to ensure that all necessary arrangements were in order. Thanks Luke, we very much appreciated all your help. PRO Charles Maclurcan and John Jeremy from Sydney ASC were assisted by Belmont members, Warren Norris and Trevor Kelly on the Start boat whilst the Mark boats were crewed by local members Alan Robinson, Pete Stuart, Les Tocque and Mal Ellis. Belmont 16 footers Commodore, David Berryman officiated at the Welcome and Presentation functions that were magnificently catered for by the Club's professional staff. Our thanks to all of you for your assistance with our event.

NSW State Association President, Peter Blunt and his Committee members, Mike Walker, Bill Tyler and Peter Wallace all contributed to the overall organisation for the event. 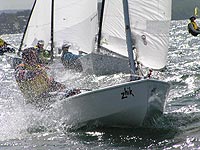 Social outings for visitors were arranged by our ladies and we thank all involved for their assistance in this regard. Lynne Burton was again active with her camera during the Championships. Thanks Lynne for the excellent photographic record of the event. As for the racing, no doubt that will be well covered by other contributors. Weather for the series was a good mix of fresh, fresher, moderate, fading, drift and all over the shop, light and a good moderate breeze for the last race. The PRO had to make a few difficult decisions and got most of them right. As usual, notwithstanding all of the varying conditions, the best bloke still won!

Congratulations to Roger Blasse from Victoria on winning his 7th Australian OK Championship. Roger was World OK Champion in 1998 and Inter-dominion OK Champion in 1987, 2000 & 2004. Roger has not sailed the OK much since his win at Airlie Beach last year. He instead concentrated on his campaign for the International 14s World Championships in New Zealand earlier in the year where he finished a very creditable 7th in an 80 odd boat fleet. With 4 wins in the first four races of this event Roger gave notice that he intended to vigorously defend his Australian OK title again this year.

Runner-up was three times Australian OK Champion Andre Blasse from Victoria. Andre was also Inter-dominion OK Champion in 1993, 1997 & 1998. With three seconds to Roger in the first three races and wins in heats 6 & 7 Andre made Roger work every inch of the way to the end of the event. With such fantastic brotherly competition we can look forward to a great effort from Roger and Andre at the 2005 Denmark OK Worlds later in the year and at our 2006 Worlds at Belmont on Lake Macquarie in February, next year.

The Veterans Championship was won by Andre Blasse from Mark Jackson and David Ketteridge, SA. Andre has reached the magic 40 figure and will now try to match Greg Wilcox from New Zealand in winning a World Championship as a Veteran competitor. Unfortunately, five times Australian OK Champion, Mark Fisher, was not able to compete this year to defend his Veterans Championship from 2004. Look forward to seeing Mark for the 2006 events. 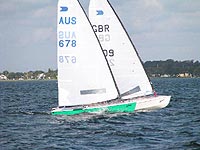 For the first time in many years we had three juniors competing in our Australian OK Championships. Congratulations to Tom Burton for a magnificent performance in his first OK event. Tom counted two seconds overall in his results and was very unlucky not to win one of those races. After doing everything right in the testing light weather heat 5, Tom covered the fleet into a big hole only to see Kiwi Mark Perrow sail the great circle route around him to catch the puff that counted to the last mark. Tom was able to drift home for a great 2nd in that race and repeated the effort in heat 6 with a sound 2nd behind Andre Blasse in another testing light weather race. Runner-up in the Juniors was Jonathon Hogan with third place going to David O'Donnell. All three boys from the Wangi club on Lake Macquarie did a good job in the fresher races and demonstrated that they have the right attitude to be competitive in the OK fleet for many more years to come. Thanks for competing in the Nationals lads, we hope that you all enjoyed the experience.

The Patrick Whittington Memorial Trophy for first on Handicap for the series was awarded to David Ketteridge from SA. This award honours a much loved former OK Association member and is awarded each year to the competitor who best demonstrates all of the qualities of an OK competitor at that years Australian Championship event.

This event proved to be a good warm up series for our important 2006 events. Its fair to say that we all learned something from the Championships and this should enable us to improve our performance in a number of areas for next year. We will need the co-operation and support from all members of the Australian OK Association and the Belmont 16 footers leading up to February, 2006.

webmasters comment: I changed the discards to conform with RRS A2 - scoring rules are often not followed by organisers, but in this case it only changes the some discards, not the score.