The tragic news reached us this week that long time Norwegian OK Dinghy secretary for nearly 30 years, Reidar Sårheim, has lost his life after an accident in September. 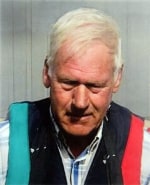 After dinner at his sailing club he went to stay overnight on his cruising boat, moored alongside a pontoon. It is suspected he slipped on the pontoon and fell into the water and drowned. It was a dark evening and no one was there to rescue him.

Reidar and I have been sailing OK Dinghies together since we were very young men in the late 1960s and early 1970s at the time when the OK class was at its top level in Norway. In the 1980s the class was not active in Norway, but in the early 1990s Reidar reactivated some of us and made us renovate our dinghies, and he built his own mould and then a new dinghy from that (NOR 463). We met for training, local racing and social gathering during all these years. Reidar was definitely Mr. OK in Norway, and has been our national secretary although we did not have a formal national association since about 1980.

In recent years we have sailed a few races in Sweden and Denmark as well. During the last few years the class has been somewhat expanded with sailors from other classes. Many OK sailors knew about him and saw him at some events, but he was a modest man, so many sailors did not talk very much with him.

Reidar was a passionate sailor in all respects, particularly for the OK Dinghy although he had other boats in his fleet as well. He not only focused on his own dinghy, but also obtained and equipped older dinghies, so that other sailors could try the OK. He knew about almost every dinghy that had been in Norwegian ownership through the decades. Furthermore, he focused on teaching inexperienced sailors whatever boat they were sailing and engaged in sailing for handicapped persons as well. He was a ‘doer’ and did not emphasize his own person.