Glenn Yates, aka Yatesy, Yoda, Bilbo… was lost at sea in the hours after 20. November 2020 on a delivery trip from Tasmania on board his new yacht. 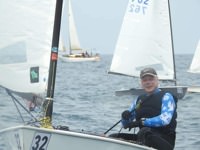 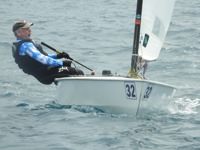 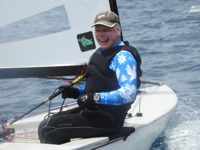 After 72 hours, the air and sea search for him in Bass Strait was called off. Glenn was an avid OK Dinghy sailor and was one of the most friendly and kind hearted sailors in the fleet.

Glenn was well travelled in the OK Dinghy class, making friends worldwide. His many overseas adventures included Poland 2007, Germany 2008, Sweden 2009, Largs 2011, Barbados 2017 and Warnemunde again in 2018, as well as Worlds in Australia. He was well travelled and much loved.

OKDIA, and OK sailors worldwide, sends its deepest condolences to his family and friends. His presence and humour will be deeply felt and missed by many in the fleet.

The news that Glenn has gone missing at sea on a Covid delayed trip to bring his new yacht Bonne Idee’e from Bellerive to his home base at Lake Macquarie is a tragedy and Glenn will be sorely missed.

I have personally known Glenn through OK sailing for many years and enjoyed racing against him and pre and post-race banter. Glenn was a well-known figure in sailing, particularly in the OK class but also more recently the NSW Impulse fleet. Glenn’s contributions to OK sailing and especially his support in the establishment of the Queensland fleet were well recognised. Glenn’s multiple boat and gear delivery trips up and down the east coast of Australia have been a recent feature, as has been his home and market visits with his partner Yan.

Glenn took up sailing as an adult and sailed in OKs for many years. He and I often had close competition in the middle of the fleet at OK Nationals but Glenn was not without podium finishes. I recall one race at an Adelaide Nationals where Glenn legitimately blocked multiple national champion and 2 times world champion Roger Blasse at the final mark rounding. Roger’s comment at the mark, having been narrowly beaten out of buoy room was “Well just don’t f… it up from here”. A nice illustration of the spirit of OK racing. Glenn didn’t “f… it up” and went on to finish second beating Roger in to third place in that race.

Glenn was a competitor in many OK Worlds where his cheerful nature and good will on the course and at the bar after made many friends amongst the international fleet. He will be missed by all.