A look at trends and equipment in the OK Dinghy class - 12. September 2022

With more OK Dinghies built in each of the last three years than in any year dating back to 1980, it is abundantly clear this timeless class is in a very healthy state. This was highlighted by the 109 boat entry for the recent World Championship in Marstrand, Sweden.

Numbers are only going to increase in the coming years. The 109 boats sailing in Marstrand came from 11 nations, though several of the larger member nations had uncharacteristically low attendance for one reason or another. So it is not hard to image events with more than 150 OKs in the near future, perhaps even 200. There are certainly the numbers and enthusiasm to achieve this.

The prospect of good competition has attracted a lot of top sailors into the class, including many former Finn sailors, and this, combined with the class’s unparalleled social element is a huge draw for many. At the end of September, the European Championship returns to the ever-popular resort of Bandol on the French Mediterranean coast with 87 boats signed up so far.

This growth is great for manufacturers, with a number of high profile companies building boats and offering products for the OK Dinghy.

With so many sailors joining or returning to the class, having this choice is great, but there are always questions about what gear to buy, what is trending, what is fast, what suits certain body types. The answers are never as simple as the questions, but the range of solutions is wider as ever.

The OK Dinghy class was built on self-reliance, with the class established on home built boats and rigs. Today the sailors have the best of both worlds with very high quality off the shelf production boats as well as the home build option, made easier by the availability of CNC cut files for jigs and parts, with more boats boats being assembled in garages worldwide over the last 10 years, than perhaps since the 1960s. Home building is certainly a growing trend again.

Here’s a brief look at the gear used at the world championship.

There were hulls from 24 builders at the World Championship. While this reflects the longevity of some hulls, it also highlights the diversity of ideas and interest in building the boats.

Despite the low UK entry, it’s interesting to note that the over 60 per cent of the boats used were actually built in Britain. Whether this trend continues given the increasing costs and logistics to export from the UK after Brexit remains to be seen, but the UK’s two main builders Ovington and Synergy Marine are still exporting more boats into the EU than they are building for the domestic market and both have set up sales channels within the EU.

For much of the history of the class the British builders always struggled to produce championship winning designs, but that is now long past and British built OKs are in big demand. Some UK builders are also exploring moving production outside the UK to both circumvent the aforementioned cost and export issues and ensure continued supply.

The majority of the hulls were less than five years old and no particularl hull was dominant on the water, with a number of homebuilds using the Leech CNC kitset package. The largest number of hulls was from Ovingtons, but given their dealers across Europe and build capacity this is no surprise. The next three Synergy, Strandberg and Idol are smaller operations in comparison, but produce high quality, fast boats.

Sailors are spoilt for choice. 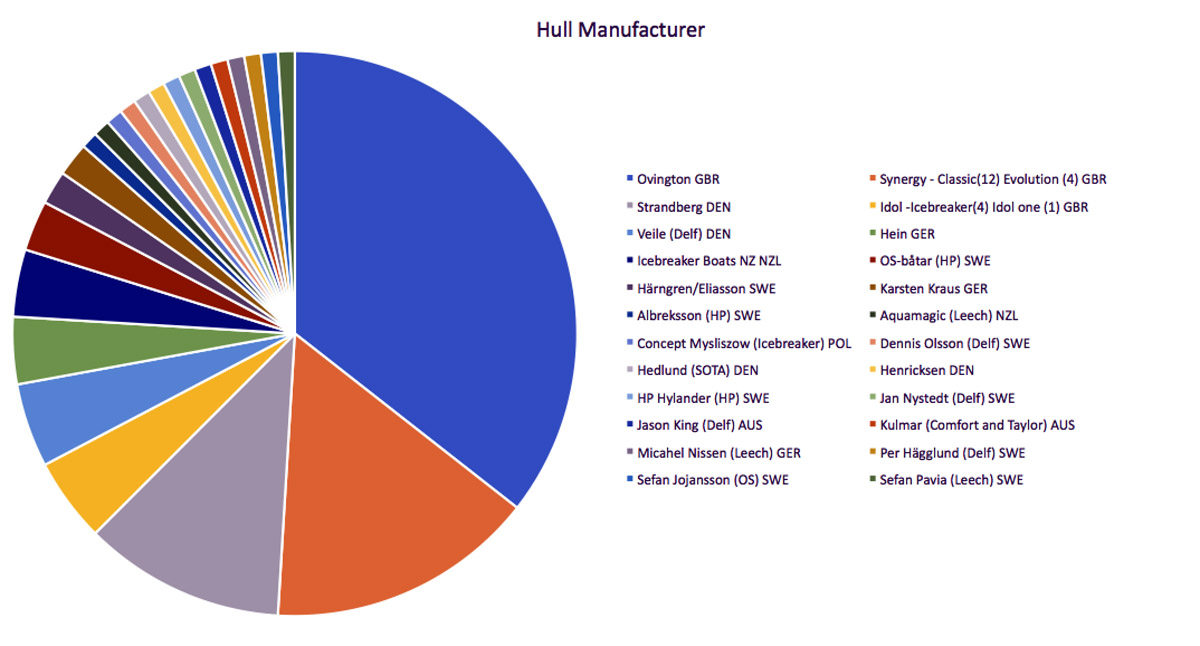 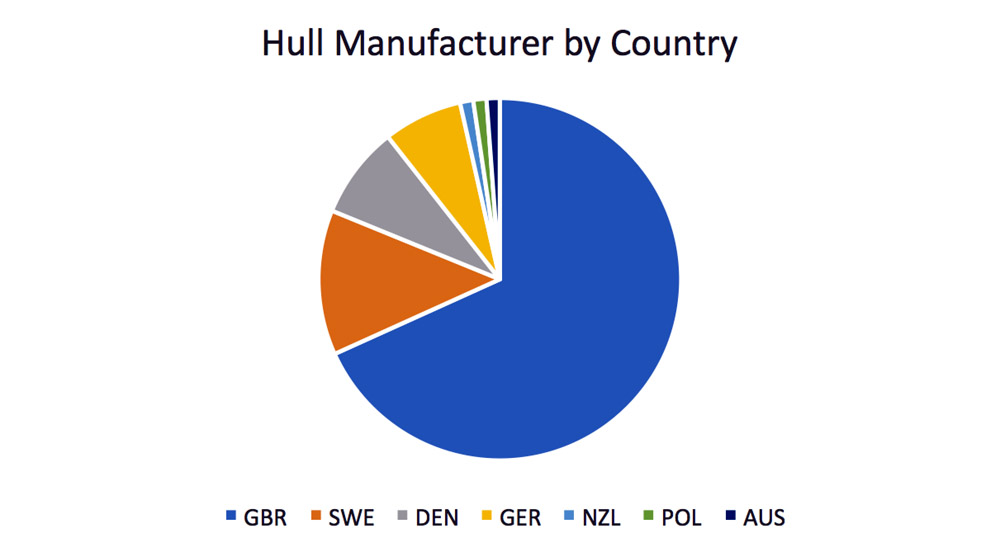 The big three of Green, North and Turtle as usual dominated numerically, while UK Sails from Denmark is making inroads into the market. It’s interesting, that unlike hulls, popular British made sails such as the HD did not make it to Sweden, except North, which again has a distribution network.

While Green sails are very popular across northern Europe, and North and Turtle have a strong following, there are a huge number of other sailmakers not reflected here, producing sails, often with local lofts working with sailors. The chart will look very different in 2023 with the World Championship being held in the UK. 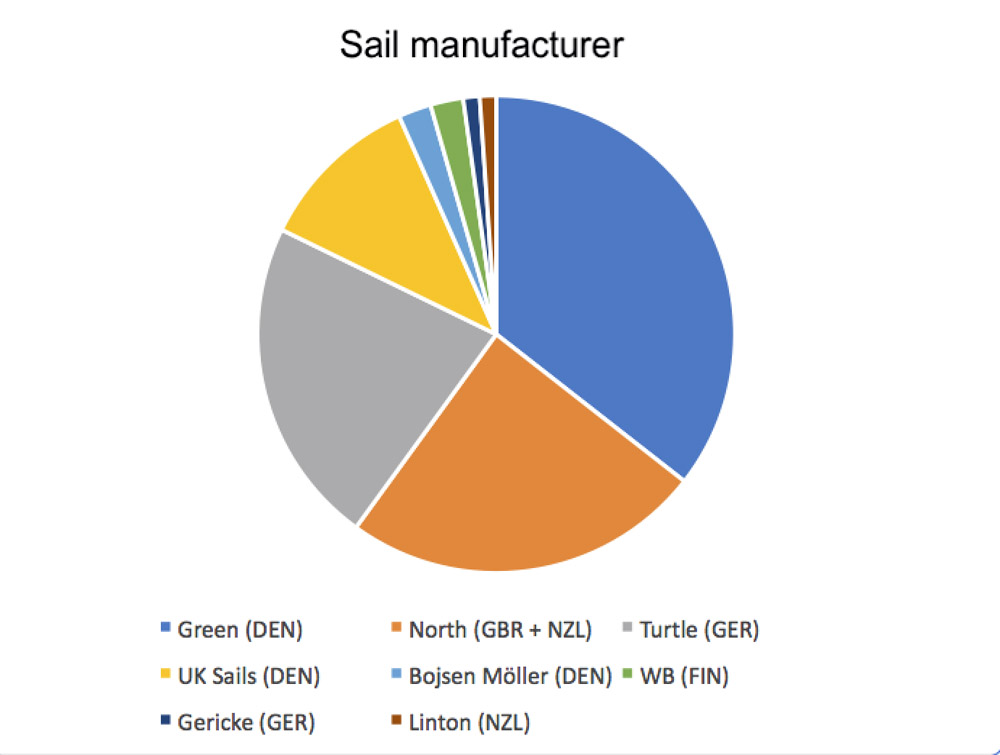 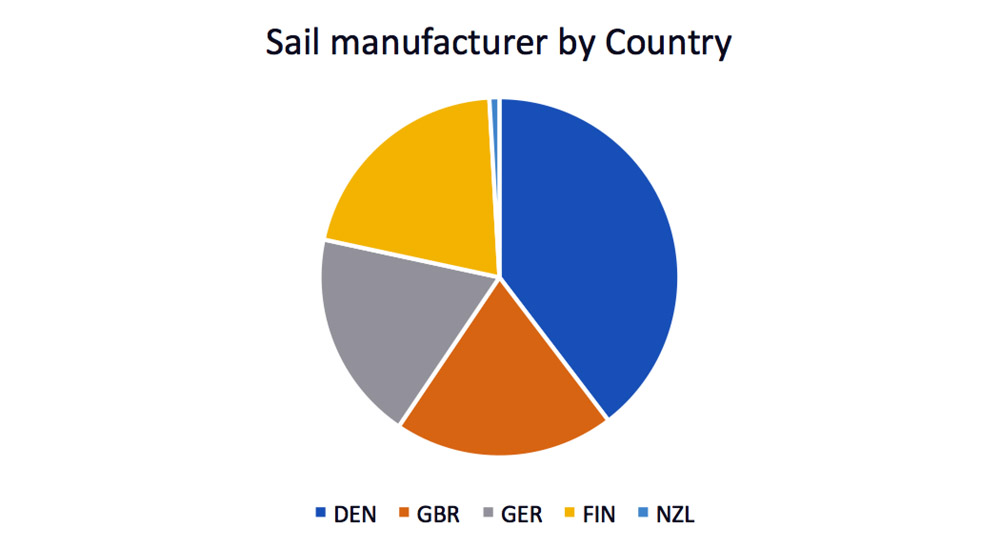 There are much fewer mast builders in the class, though perhaps due to the location of the worlds, Ceilidh dominated numerically in Marstrand. However both Ceilidh and the C-Tech masts were equally spread through the fleet. The Paragon masts – developed by Dan Slater to win the 2019 world championship – are made in New Zealand and also sold through Ovington in the UK, though these have not yet made much impression. 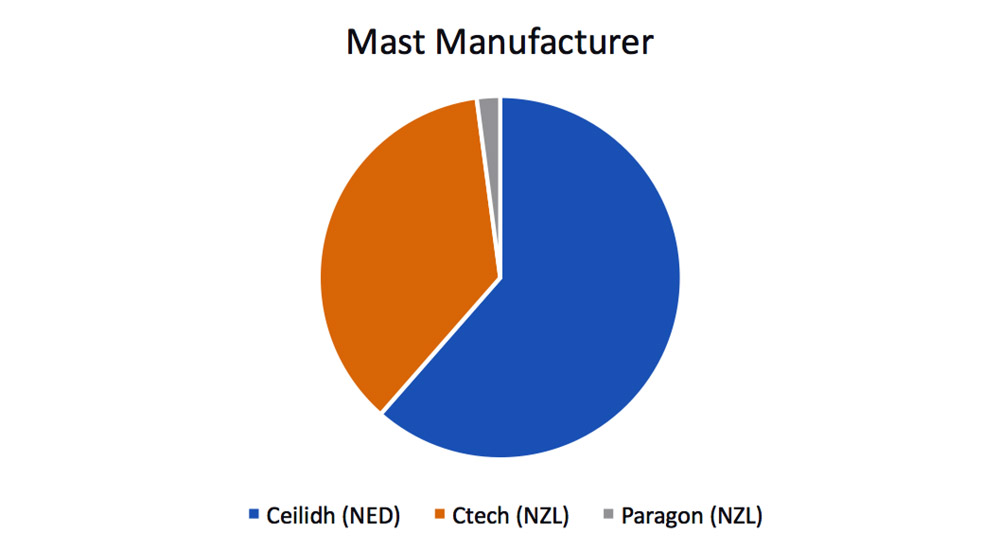 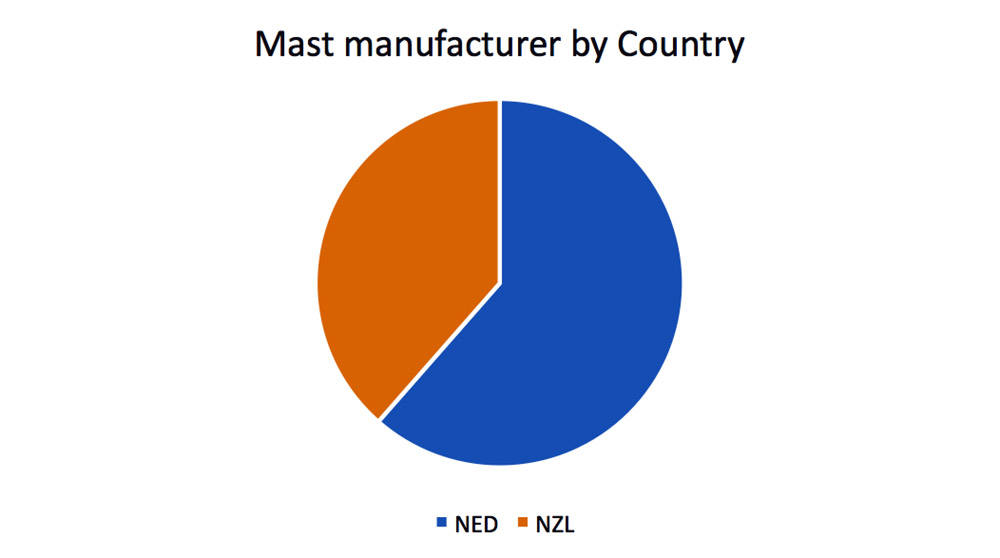 Booms have never been particularly interesting, but in recent years there has been something of a market takeover by New Zealand based Art of Racing, which also supplied most of the Finn fleet at the Tokyo Olympics. It’s debatable whether a boom makes much of a difference in terms of stiffness, though what is more important is fit out and reliability.

Needlespar used to be the go to manufacturer, but AoR have turned booms into an art form and now dominate the fleet. Allen meanwhile has since developed a very similar looking boom to sell alongside its much cheaper base model. 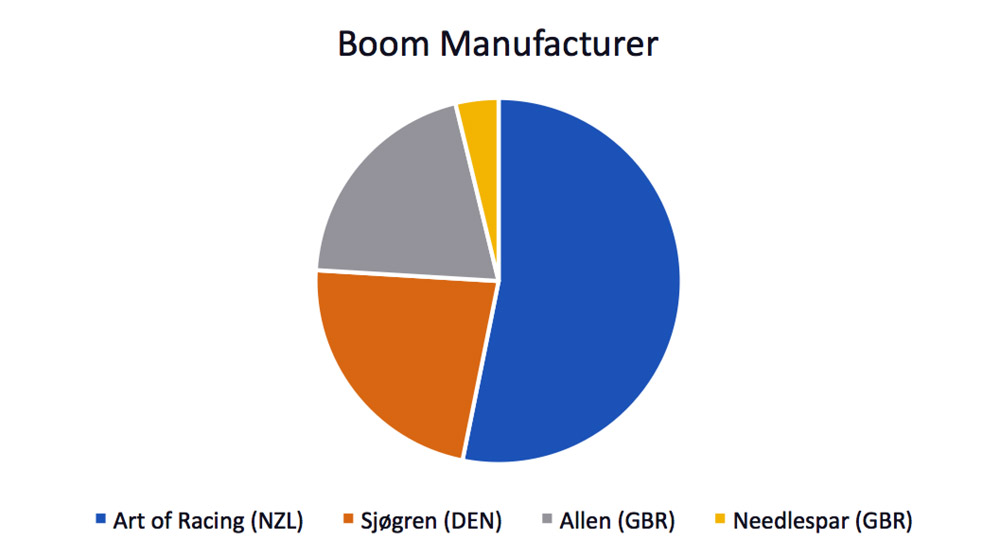 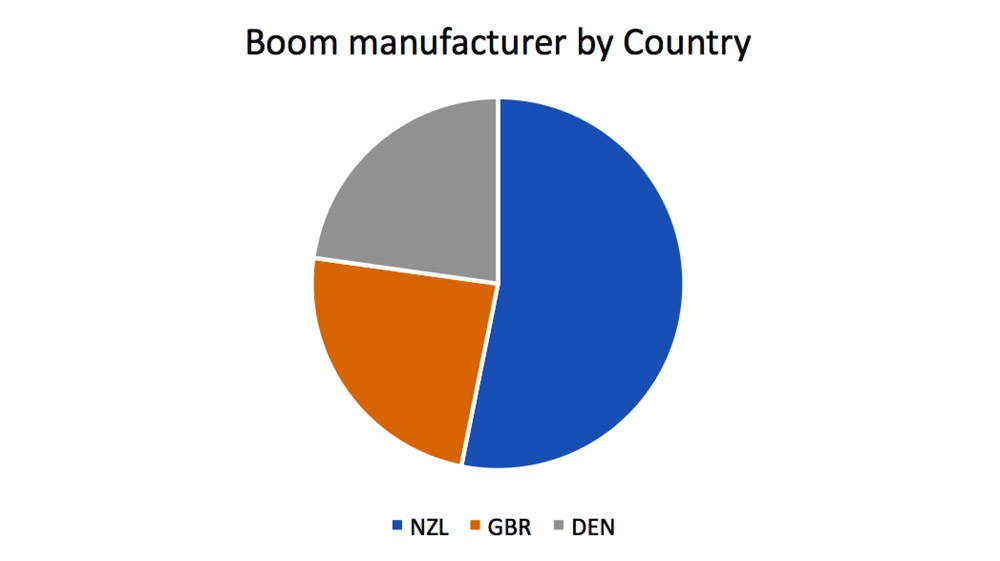 So what is fast and what is trending?

As always it’s all about personal choice. Any equipment can look fast in the right hands and the right conditions and it’s fair to say that anyone in the top ten would almost certainly still be there whatever equipment they used. A few years ago New Zealand made Icebreakers were in vogue and dominated international fleets, then Synergy Marine won several world championships, and now it’s the turn of Ovington, which has sold heavily into Sweden and Germany, so it’s only natural that the boats would figure well.

The class is in a really healthy state with a wide choice of good builders and styles to suit many sailors’ tastes. Any class that has such an extensive choice of equipment suppliers while still having older boats that are still competitive is very fortunate and bodes well for the future of the class.