Many stories have been told about the great Paul Elvstrøm since his death in Hellerup on December 7th 2016. His little known impact on the OK Dinghy was significant, and many believe without his influence the class would have never gained a foothold in Denmark, which eventually led to the gaining of international status. 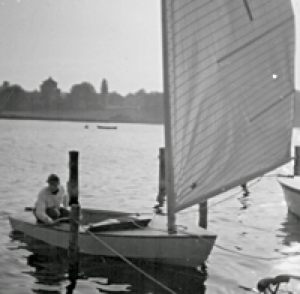 Svend Jakobsen, the first OK Dinghy World Champion in 1963, tells us this story:

Paul was a committed supporter of the OK from the very beginning in 1956. He made the first rig and sail that was tested on Axel Damgaard’s home water in Vordingborg. The sail had very long battens, but it did not satisfy Knud Olsen and Axel Damgaard (see pictures). Therefore the mainsail of the Pirat dinghy was chosen instead.

There is no doubt that Paul was consulted all the way until the final choice of rig was agreed, even though it would have been better for his business to choose a new sail/rig.

To support the class Paul accepted to be elected the first chairman of the Danish OK Dinghy Association in the Spring of 1957. He also accepted to be chairman of the Racing Committee at the two first Danish Championships, which was something that he never did for any other classes at that time. He even invited his good friend, Pierre Poulain, a leading Finn helmsman from France, to participate in the first championship. Pierre finished third in a light wind regatta.

To understand the importance of Paul’s support we have to remember that many leading officers of the largest yacht clubs in Denmark were dead against the OK Dinghy, and wanted it banned from all racing. The reason for this was that in the junior sailing clubs the mantra was, that if you capsize, you stay with the boat until help arrives. However, the OK Dinghy was a boat that did not fill with water when capsized, but could easily be righted. But in extreme cases there was a risk that the helmsman could not swim to the boat, and that it could drift away.

Today it seems odd that the most resistance came from Paul’s own club, Hellerup. This resulted in a situation where none or only a few OKs were based in Hellerup, something that has certainly changed today. The last ‘attack’ on the OK came as late as 1962, but after that the resistance disappeared. Today Hellerup is home to one of the largest and most successful fleets of OK Dinghies across the world.

Paul argued all the time for the OK, asserting that nothing was wrong with boat, but the helmsmen had to learn how to sail such a light and demanding boat. As most of the new helmsmen came from heavier dinghies (for example, the Pirat) or the small keelboat (Juniorboat), this would take some time. He also argued, that if the same helmsmen sailed the Finn, the situation would be worse, due to the lack of buoyancy in the Finn that time. His support cannot be overestimated; it was of extreme importance during those years.

Finally Paul took the drawings of the OK Dinghy with him to regattas all over Europe, and convinced his Finn colleagues to introduce the OK Dinghy in their own countries. These included Pierre Poulain in France, Richard Creagh-Osborne in UK, and André Nelis in Belgium. These three countries, together with Scandinavia, were first to get the OK Dinghy going, thanks to Paul. 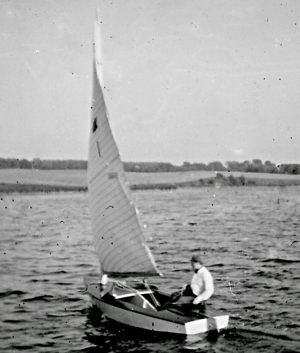 In fact the founding members of OKDIA came from Belgium, France, Germany, Great Britain, Norway and Sweden. Ironically there was no representative from Denmark at that first meeting.

To recognize the influence of Paul Elvstrøm on the history of the OK Dinghy, even though he never raced the boat, in 2012 he was inducted into the OKDIA Hall of Fame.

OKDIA extends its condolences to Paul’s family and friends.