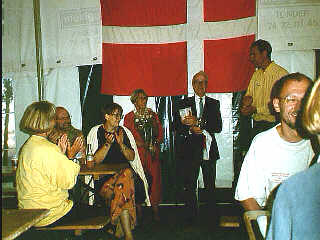 Triplets Torben, Bjørn and Knud were born in 1919 in Præstø, where their father worked as a carpenter. As boys they could always be found in the fjord or the harbour, and all three wanted to work with boats and sailing. Torben went to sea and became a skipper, while Bjørn and Knud were apprenticed as carpenters and joiners. However they preferred to build boats, and as 20 year olds, they started their own business with the double - ended "Vata". In 1941 - only 22 years old - Knud Olsen submitted a design in the competition for the new Folkboat, with "Swan", and in 1943 he drew up the design for five 5-m boats which the brothers built for a yacht agent from Copenhagen and who had high expectations for the future of the class.

After the war it was almost impossible to get materials, so Knud and Bjørn gave up the boatyard on Præstø and went to Sweden. Ten years later, Knud was home again and worked partly at building and partly designing boats and things started to get exciting. All types of boats were built, including motorboats and fishing dinghies, but the design had to be practical. The boats had to be easy to sail, and cheap to build, and Knud quickly devised his own style, a far cry from the expensive cutter-type with the long overhang and heavy demand on materials.

In the beginning of the 1950's he began to work for A.P.Botved, who started producing speedboats in Vordingborg using veneers covered in fibreglass like the American boats. There was now time for him to design boats in his spare time, which resulted in a design for a 4.5m dinghy . It was never built, but when architect Axel Damgaard came home in 1956, the design reappeared and led to the world famous OK dinghy. You could call it a coincidence, but Knud Olsen fulfilled an enormous need with that dinghy, or in a way created it. A cleverly constructed dinghy could have provided similar sailing characteristics but would never have had the same success. The friendly wooden OK dinghy gave fine sporting features, and was both cheap and easy to build. The way was clear for an untold number of amateurs who would never have been sailors if it had not been for Knud Olsen - and it was also a challenge even for more experienced sailors. 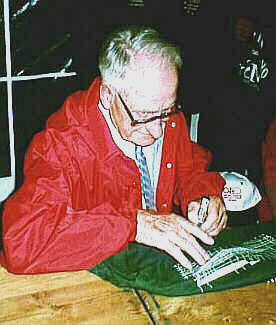 Knud Olsen stayed with Botved till 1961 when he started his own business in an old cornwarehouse in Bandholm harbour. In spite of building many boats he couldn't make a living, because, as he said, "people came and asked if I had something they could sail, so I gave them an old design or a cheap one." Not much reward from that and no fees either, and for the same reason he wasn't really established among the famous names such as Utzon and Slaaby-Larsen, though his designs were in the same class as theirs, and drawn with an even greater practical influence insight.

In Bandholm he began to build a 10m squaresterner in mahogany, but became quickly more interested in the possibilities of fibreglass. He was already familiar with the material from his days with Botved. The design became the Bandholm 26 which, together with Bianca 27 and Great Dane 28 built in association with the Nimbus brothers, were the first generation of Danish keelboats in fibreglass. Only the hull was fibreglass as Knud Olsen always felt that the deck should be wood to give the dinghy the right feeling. Later came the Bandholm 20 and Bandholm 30, which were superseded by the Mariboat at the start of the 70's. The Bandholm 20 appeared later in a short keeled version as the Bandholm 24, and for the first time Knud Olsen was able, as the licence holder, to make a living as a designer. When the Mariboat later had problems, he was forced to take up boatbuilding again, now mostly with simple jobs or refitting bigger boats.

As the years went on he built about 175 boats, and his son Lars Olsen has inherited his father's talent, so for many years to come there will be many boats on the water which are 'simply OK'.

The OK dinghy designer Knud Olsen quietly passed away in his hometown Bandholm on Augustug. 31 2010 at the age of 90.

Knud Olsen did live a good and meaningful life also after his retirement from the Industry, and he lived to see the OK-dinghy grown to be a strong and durable Worldwide Dinghy Class - even growing in Denmark as the “Gentlemen’s Dinghy Class”.