Bo Petersen goes into World Championship as World No. 1 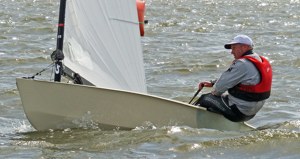 Bo Petersen (DEN) stays at the top of the OK Dinghy World Ranking List as the fleet heads into the 2016 World Championship at the end of next week, in Quiberon, France. Former World No. 1 Greg Wilcox (NZL) retains second place, while 2009 World Champion Thomas Hansson-Mild (SWE) climbs from 15th to third.

Petersen’s win at the combined European Championships and Spring Cup in Medemblik, as well as a win at the Nordic Championship in Råå, Sweden helped him stay at No. 1, though Wilcox, whose only podium place this year was silver at Warnemunde Week, has narrowed the points gap. Hansson-Mild won Kiel Week as well as picking up the bronze at the Nordics.

One of the biggest movers is Richard Burton (GBR). After a second place at the Europeans, he moves up from 28th to tenth overall, his highest position ever. In addition Stefan Myralf (DEN) is back in the top 10, moving from 13th to fourth.

World champion André Budzien (GER) drops out of the top 10 after skipping the European Championship, which had a high points rating due to the large number of sailors and nations taking part. He later placed third at Kiel Week, behind former World No 1. Jørgen Svendsen (DEN) and Wilcox.

The 2016 OK Dinghy World Championship – for which more than 110 entries have been received – opens in Quiberon, France on Friday 22 July, with the racing running from Monday 25 to Friday 29 July.