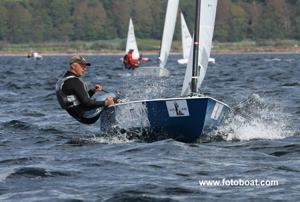 It is all change at the top of the final OK Dinghy World Ranking List for 2011. Former World Champion Greg Wilcox (NZL) takes the top spot for the first time, moving up one place from the previous release after a fourth place finish at this summer's world championship in Largs.

This release includes the World Championships, as well as National Championships in Denmark, Belgium, Poland, Sweden, Great Britain and France. The previous dominant nation, New Zealand, failed to show up in any numbers in Largs, so many have largely dropped out of the all important top 20. They will have to up their game and send a good fleet of boats to the 2012 World Championship in Denmark to get some ranking sailors back in the top 20.

Despite winning the World Championship and the British nationals, Nick Craig (GBR) drops from first to fourth, mainly because he has to count other low scoring regattas compared with Thomas Hansson Mild (SWE) in second and Alistair Deaves (NZL) in third. Craig always suffers from lack of couting regattas.

Wilcox, on the other hand, sailed in high scoring regattas such as the Danish Nationals and beat Craig at two of their four meetings this year. He is only the fourth sailor to top the list but also the first to get over 1000 points on the first appearance at the top. This was the result of sailing well at high scoring reagttas.

Encouragingly there are lots of new names on the ranking list and it's especially good to see lots of Danish and German sailors getting new boats.

This release is the 22nd issue of the OK Dinghy World Ranking list since it was introduced in 2005. There are now more than 700 sailors in the database, although many have no scoring points from the previous two seasons so don't appear in the latest list. The next release will be after the Interdominion Championship in New Zealand at Easter 2012.