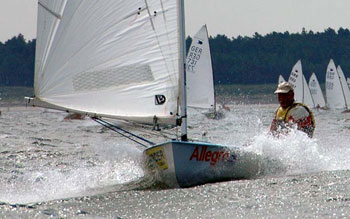 Jørgen Lindhardtsen at the World Championship 2007

Evergreen Lindhardtsen back on top

Consistent results and consistent showing from Jørgen Lindhardtsen (DEN) has taken him back to the top of the final OK Dinghy World Ranking List of 2008, knocking the triple world champion Nick Craig (GBR) of the top spot for the first time in two years. Less points than last year from Craig at the both the world championship (where he finished second) and Kiel Week (third), combined with missing several of the later season events has cost him dearly, though with a new boat beckoning for 2009, he is still a long way from being a has-been. Meanwhile Lindhardtsen, competed in one more event than Craig and also convincingly won his 13th Danish National title to add to other great results earlier in the year to reverse Craig's 30 point lead and take the overall lead for the second time in the history of the Ranking List.

The actual sailors in the top 10 remain exactly the same for this issue, but some have shuffled places. World Champion Karl Purdie (NZL) remains in third, having not competed in any events since the last release, althoughwith the southern hemisphere season only just getting underway, there could be big changes for the next release. A good performance from Purdie at the Interdominion and New Zealand Nationals should allow him to take the lead.

For the first time ever the ranking list now includes 397 competitors from 12 nations. The next release will be in March after the main events downunder have been completed.