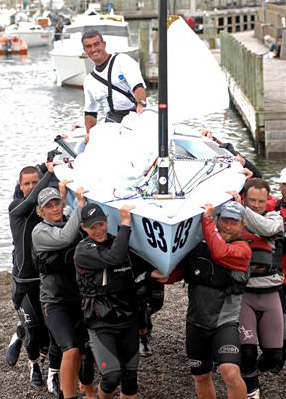 To Results
both further down this page

Ocean Photography, they have an exeptional deal for all competitors: 48NZ$ for a CD with all Photos for prvate use.

Unfortunately some parts are unreadable.
All official Press releases with some Photos

Wellington turned on more champagne sailing today for the Invitation Race of the OK Dinghy World Championships. The day dawned with glorious sunshine and unusually mill-pond-flat water, which was a perfect backdrop for the thousands of Rugby Sevens spectators making their way along the waterfront to the Westpac Stadium.

The most creative costumes past the Yacht Club were the young guys and gals dressed as 101 dalmatians, complete with leather dog collars and doggie identity discs - inspirational. Our own Yacht Club girls, dressed as pilots, entertained the sponsors boat (BMW and Eye Talent Management) before the former left for the rugby and the latter headed out on the water.

46 sailors left the shore in an 8 knot breeze, which built to 15 knots during the course of the race - perfect sailing conditions.

Reigning World Champion, Thomas Hansson-Mild from Sweden, led the race from the start, with Paul Rhodes (NZL) in second. When most of the fleet split, Hansson-Mild went up the middle, and led round every mark. With the breeze building Karl Purdie, who had crept up from fifth to third around the marks, hit the left hand side very hard and finished second just behind Hansson-Mild.

The competitors then gathered in full team uniform for the official welcoming ceremony and powhiri at the Museum of New Zealand Te Papa Tongarewa. The Tangata Whenua were impressed by 150 sailors and their whanau from around the world booming out the waiata Te Aroha!

Paul Rhodes Off To Good Start On Day One - Sat. 6th February

The first day of the 2010 OK Dinghy championships started with a cloudless sky and variable five knot northerly on the harbour. 70 sailors left the boat park and then 'hung around' for a few hours as they waited for the wind to settle in.

After shifting to course 2 the first race of the OK Dinghy World Championship was under away in around 12kts of breeze. The fleet was well spread on either side of the track. Ben Morrison from NZ led at the first mark of the first race. Michael Williams from Australia rounded in second place followed by Jono Fish from Great Britain. New Zealanders Russell Page Wood and Daniel Bush rounded out the top five.

Second time around Ben Morrison was still in the lead at the top mark with reigning World Champ, Thomas Hansson-Mild moving into second place. Russell Page Wood followed in third with Steven McDowell and Michael Williams rounding out the top five.

The race committee then reconfigured the track for Race 2 with the wind settling in around 15 knots from the north. First round the top mark for Race 2 was Paul Rhodes from club mate Karl Purdie with Australian, Michael Williams in third. Russell Page Wood was in fourth while Brad Douglas was in fifth. Paul Rhodes ended up winning race 2 from Michael Williams of Australia. Young Wellington sailor Matthew Steven took out third place followed by Karl Purdie and Russell Page Wood..

At the end of the day Dragon Boat racing, with 14-18 on each boat, provided the evening's entertainment with the Europeans winning the first and Australians winning the second.

Day two began with a good steady breeze from the North, 15-18knts, and beautiful sailing conditions. There were 67 finishers in race 3. One of the two female competitors, GER724 - Marina Dellas retired due to a broken mast.

Race Management were keen to get Race 4 underway before the forecasted Southerly arrived. Thankfully it never did. The wind steadily dropped off and, as a consequence, Race Management shortened the last leg before the wind died completely, which it did by the time the competitors were back to the Boat Park. There were 65 finishers.

When the sailors came ashore Paul Rhodes lodged a protest against Karl Purdie. As a result of the protest, which related to Race 3, Karl Purdie was disqualified. This has dropped him from 2nd overall to 16th after 4 races. Karl has lodged an appeal against the protest which should be held before racing begins again.

Thomas Hansson-Mild is currently 23rd as he is carrying maximum points from race 2 for being on course side at the start.

Monday 8th February, is a Reserve Day. There will not be any sailing. The competitors will have a well-earned rest and are off to the Wairarapa with their friends and family for a day of wine-tasting and a long lazy lunch.

The start of Day 3's racing emulated the America 's Cup - with flat water and sailors just hanging around. Unlike Valencia , the wind came in and Race 5 of the 2010 OK Dinghy World Championships was able to get away.

Following his disqualification from Race 4, Karl Purdie (NZL531) was ready and loaded for Race 5. All guns blazing, Purdie came out on top - first round every mark and first over the finish line. Michael Williams (AUS730) chased Purdie from mark 2 and finished second, with junior Matt Steven (NZL519) in third.

This left Purdie in a great position - with 6 races nearly in the bag he would be able to drop his worst result to date, being the disqualification from Race 4. Unfortunately, Purdie misfired at the start of Race 6 and was OCS (On Course Side). Now, with two 'dud' races in his lap Purdie was faced with a possibly insurmountable challenge.

However, divine intervention played a hand and a dark cloud developed over the course, sucking away the wind. Race Officer, John Parrish, had no option but to abandon Race 6. A reprieve for Purdie.

When the flukey wind finally settled down the Race Committee was able to lay a new course and, at 1700hrs, get Race 6 underway for the second time.

Purdie's gun was out of bullets this time, finishing in 18th. However, he was not alone in being down the fleet ... local adversary and current leader Paul Rhodes (NZL517) was 29th, current World Champion Thomas Hansson-Mild (SWE100) 20th and Nick Craig (GBR2134) 16th.

Local guns Karl Purdie (NZL531) and Paul Rhodes (NZL517) fought it out today. After a volatile couple of days Purdie worked hard enough *to reclaim the top of the leader board at the end of Race 8.

With only one day of racing (two races) left it will be every man for himself out there in Wellington harbour tomorrow. Provisionally there are four New Zealanders and one Australian in the top five after eight races.

In Race 7, Thomas Hansson-Mild (SWE100) was steaming-it during the first race and led round every mark. He was chased by Brad Douglas (NZL539) in second and Karl Purdie (NZL531) in third until the finish, when Purdie came in ahead of Douglas, reversing their positions. It was a cosmopolitan top five with Soenke Behrens (GER690) fourth and Andre Blasse (AUS729) fifth.

Race 8 was consistent with Paul Rhodes (NZL517) leading round every mark to the finish, with Terry Curtis (GBR2118) right behind him the whole way and Russell Page-Wood (NZL526), Mike Wilde (NZL535) and Karl Purdie (NZL531) fighting it out for third, with Purdie finishing in third place. In the end Hansson-Mild was fourth and Wilde fifth.

With a delayed start, a general recall in the first race, change of course and the wind shifting between 4 and 12 knots, it has been an eventful (if not dramatic) day.

Full results can be found on the homepage of the OK Worlds website, where regular updates will be posted during the course of racing.

It All Comes Down To The Final Day - Thu. 11th February

66 sailors headed out to the course area for race 9 which started at the second attempt under a black flag. The majority of the fleet held their starboard tack for much of the first half of the beat. As the wind dropped from 8 to 5 knots, they migrated to the corners looking for more pressure. A clear leader at the windward mark was three times World Champion, Nick Craig (GBR) with the junior Matt Steven (NZL) leading the pack, and Kagan Weeks (NZL) 3rd and Brad Douglas (NZL) 4th. At this point World Championship contenders Karl Purdie (NZL) and Paul Rhodes (NZL) were lying 9th and 31st respectively. At the wing mark Craig had increased his lead which he held to the leeward mark. The second beat was shortened, but the first 4 positions remained unchanged. Craig had a 40 second lead on the next two and they had a 40 seconds lead on the rest. Greg Wilcox (NZL) pulled up to 5th from 10th place with Purdie in 6th. Alistair Deaves (NZL) was also having a good race - this his second result in the top ten in consecutive races. As the sailors worked their way up the final beat the wind increased to 8 knots and more as tired legs hiked to maximise boat speed and safeguard positions. At the finish Craig had a comfortable lead over Steven and Weeks who celebrated his first top ten result. Five different nations were represented in the top ten in race 9.

Race 10 started swiftly after completion of race 9 in 11 knots of breeze. The contest was by no means decided as the competitors lined up on the start line. After a clear start, the competitors were evenly distributed over the course, the main contenders choosing a central route. As the fleet neared the windward mark, the competitors on the right of the course had the edge over those on the left. Leading the fleet was World Championship contender Paul Rhodes (NZL) with Nigel Mannering (NZL) lying in second place. A past World Champion Nick Craig (GBR) was 3rd and current World Champion Thomas Hansson-Mild (SWE) 4th, with Greg Wilcox (NZL) another past Champion lying in 5th place. As the fleet headed down to the gybe mark, lighter airs caused the fleet to bunch up but Rhodes was still in the lead, with Douglas hot on his heels. Wilcox caught a good wave and surfed past both to take the lead. Craig and Hansson-Mild remained ahead of the chasing pack. As the fleet headed up the second beat, Wilcox increased his lead as he a l d i t l a i . e rounded at 14:19 with Douglas still second and Rhodes had dropped to 3r`. The &l`et ha` completed the rounding in 6 minutes, as they headed down to the leeward mark on their final run of the Championship. Wilcox held the lead on the final beat, but was being chased hard by Craig who had risen to 2nd place. Michael Williams (AUS) had worked his way through the fleet to climb to 4th position behind Hansson-Mild. Both Mannering and Rhodes dropped places, but Luke O'Connell (NZL) climbed to 7th from an early 12th. Despite finishing 10th in the final race, this was good enough for Karl Purdie (NZL) to take the World Championship in 2010 at his home town with 49 points, clear ahead of 2nd place Williams who finished on 62 points. Junior Matt Steven had a disappointing race, but a fantastic regatta, finishing in 3rd place on 68 points.

The Practice Race was won by Thomas Hansson-Mild (SWE 100)