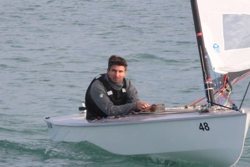 It was once again time for ok sailors across the country to travel to Napier to compete in the ok brass monkey regatta held over Queens Birthday weekend. Great catch up and discussions were had on the Friday night at Napier sailing club over a few jugs of beer and rum. With a few class regulars missing from this year’s event, some took it upon themselves to drink for those absent. Enjoying the moment for such a long time, they watched the frost fall in the early hours of the morning from a hot tub.

Clear skies and not much wind greeted the sailors Saturday morning which was a relief for those who had sore heads. However 2 races were had in the afternoon. Peter 'Rocky' Lester was first to the right corner and led round the top mark and never lost the lead to take the first race. Luke 'Colt' O'Connell sailed through the fleet to take second. Rob 'One Punch' Hengst finished 3rd followed closely by Steve 'The Lead Dwarf' McDowell and David 'The Marksman' Hoogenboom.

Race 2 quickly followed the first race, this time it was Colt that got to the right corner first and extended away to take the win and the tiki again. Matt ‘The Champ’ Stechman sail a great race to finish second. Chris 'I want the tiki' Fenwick third followed by The Lead Dwarf and Jono 'rabbit' Clough, with Ade 'ok for life' Coulthard rounding out the top 6. 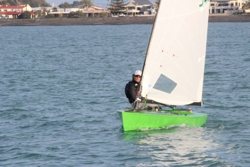 In classic brass monkey style the fleet had an excellent bbq and beverages. Fuelled by rum some creative answers were given, but no points scored in a quiz that Matt & Meg Stechman hosted, with rounds testing ok and NZ yachting history, general knowledge and who is it. It was the bar staff who used their joker in the last round to take the win. Several members went to a local establishment to dance the night away, but the dancing was cut short when one of the fleet, after getting thrown out tried to hop his way back in. Never the less the drinking continued on…

Sunday came and there were some immobile people scatted round the boat park. There was less wind than forecast so the fleet again waited until midday for the start of the first race. Colt played shifts up the middle to lead round the top mark and sail away for the win. Kagan 'one day' Weeks showed great form to finish second. Fenwick sailed a great race holding off third from an awakening Rabbit and The Lead Dwarf. 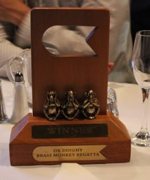 The fourth race started in a dying breeze with the wind dropping away altogether as the fleet neared the top mark. Fenwick rounded first followed by The Marksman, Chris 'The Animal' Devine, Colt and Rabbit. The fleet drifted downwind for a long time and the race was to be shortened at the bottom mark. Fenwick drifted across first half a boat length in front of The Marksman to take his first tiki after 19 years of ok sailing. Well done Chris. The Animal finished third with Rabbit’s drifting skills just nudging past Colt.

That evening the prize giving was held at the thirsty whale with a great buffet meal and slideshow. Special mention to Simon 'The Brit' Probert for sailing in his first ok regatta. And to Riley 'Skiffy' Dean for borrowing a boat and seeing what it’s all about. Hope for some breeze next time to stretch the legs. Also massive thanks to Marty ‘The Man’ Weeks for putting the whole regatta together, to the race committee for running great racing and to Katie Hakes for the photos. The next regatta for the ok dinghy fleet is the rum bucket held at Wakatere over labour weekend.