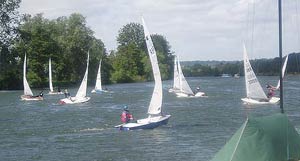 22 OK's made the trip to Upper Thames Sailing Club on the weekend of 21-22 June. The overnight rain held off for most of the day but the weather was overcast with the wind ranging from force 1 to 3, although the direction meant that much of the race area was in a wind shadow.

Jim Howden worked his way through the fleet on the left bank to lead at the first mark followed by Julian Burnham and junior Alex Hobern. Terry Curtis worked his way back from choosing the less favoured right hand bank, but he could not catch Howden who led all the way round, with Curtis 2nd and Hobern 3rd.

The second race was a close race between Curtis, Burnham and Mike Edwards, with all three taking turns in 1st place and Alan Atkin leading the chasing pack. Edwards took the race with Curtis 2nd and Burnham 3rd.

Overnight the weather changed and Sunday brought sunshine and a fresh breeze blowing straight down the river, topping out at 30 knots on the club anemometer. Mike Edwards took an early lead but allowed Curtis to overtake when rounding the home mark in the wrong direction. The first 3 developed a good lead from the chasing pack but Edwards gave up his 2nd as he failed to unwind following his earlier mark rounding error, giving 2nd to Julian Burnham and Gavin Waldron 3rd. 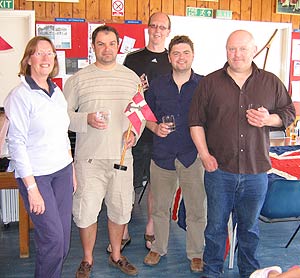 Mike Edwards led the 4th Race from start to finish, closely chased by Neil Goodhead. The leading pair pulled away from the rest of the field with Terry Curtis in 3rd. By now the strong and gusty wind had taken its toll and the fleet was depleted for the final race after lunch. Big shift at the start made for a very close first beat with Edwards, Curtis Burnham and Waldron all very close. Curtis pulled away with Edwards and Burnham chasing. Daz Prior overtook Waldron and Garth Thompson and Mick Haigh were also pushing hard. Edwards caught up with Curtis just before the finish, with Curtis vigorously protecting his lead. This also allowed Burnham to close the gap, but in the end ran out of time, with Curtis holding his lead from Edwards, Burnham and Waldron.