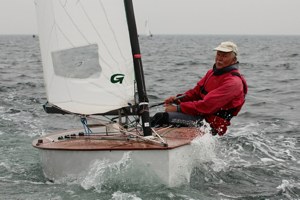 If a man is judged by what his friends would say about him, then there can be no greater man – or OK Dinghy sailor – than Jørgen Lindhardtsen. The esteem and respect that his fellow sailors hold for him was openly apparent at the weekend when more than 150 of them came together for the Lindhardtsen Classic in Hellerup, a celebration of his 70th birthday, which fell on Saturday, 25 April.

The idea was simple. Hold a few races and a party to celebrate the 70th birthday of a legend in the OK Dinghy class, even a legend in sailing. But it turned into far more than that. The regatta attracted 63 entries from five countries, with many more sailors flying in to just be there, and still more sending message or calling during the evening.

The fact that the Danish fleet can muster 63 boats for a one-day regatta says volumes about the current state of the class in Denmark, but it was about so much more than that. The Lindhardtsen Classic drew perhaps the largest one-day fleet the class has ever seen - and it was full of current and past champions, including Lindhardtsen himself. 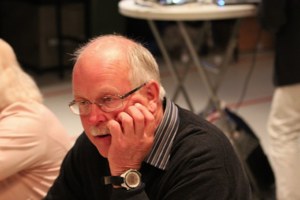 Jørgen Lindhardtsen was sailing OK Dinghies before most of the current fleet were even born, and at 70 years old, is still beating many of them. Jørgen is affectionately known within the fleet as the 'old man'. In fact he has had that moniker since before he was the age that most of the current fleet have now become. His longevity in the class has lengthened the sailing life of countless sailors, none of who can face giving up while the 'old man' is still sailing.

He started sailing the OK Dinghy in 1964 and won the 1978 World Championship at the age of 33. Around that time he also moved into the Finn class where he represented Denmark at the 1976 Kingston Olympics. In 1993 he returned to his first love, the OK Dinghy and won the very windy 1998 European Championship at the age of 53. In a 2007 summary of 50 years of the best OK Dinghy sailors of all time he ranked number one in the world, the most successful OK Dinghy sailor up to that point. And he just won’t stop. He has inspired more than one generation that age can never be an excuse. Even at 70 he shows no sign of slowing down, still trying to develop his rig and become better. He is a role model, an inspiration and a legend for all those who sail an OK Dinghy. 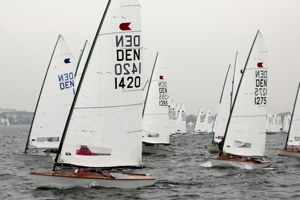 While many were hoping the 'old man' would win the Lindhardtsen Classic, the fleet of 63 OK Dinghies from five countries had other ideas and gave him no quarter to try and win the event. Home advantage was evident with most of the front runners from Hellerup Sailing Club, with the racing held in the waters just off from the house of Paul Elvstrøm, who played a key role in the rig design of the OK Dinghy prototype back in 1956. 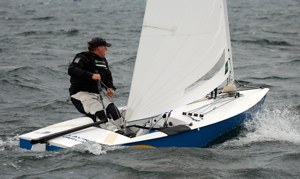 With no discard it all came down to the last race. Hansson-Mild rounded well ahead and extended for a big win to take the event. Svendsen eventually came through for second and second overall, with Petersen crossed seventh to take third. With Johannsen taking fourth overall, Lindhardtsen rounded out the top five.

There is no stopping the wily septuagenarian (above in DEN 1420). He showed flashes of brilliance all day. On the race course he rarely puts a foot wrong and still often pulls in big results in competitive fleets. He still prefers the big breeze, as he has his entire sailing career, but admitted on this occasion that maybe the lighter winds were better for the visitors and guests who had borrowed boats, notable sailors from the 1960s and 1970s Steen Kølhede and Ib Ussing Andersen. Even so the wind had a bite, picking up to 16-18 knots in the middle of the day. 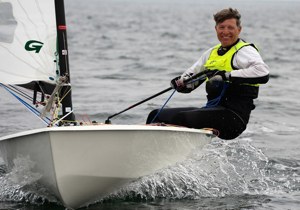 The strength of the fleet in Denmark is amazing. They have doubled their numbers in five years, by a concerted promotion campaign, and especially by appealing to sailors looking for fun, social and competitive racing in large numbers. The Hellerup fleet alone, now including Lindhardtsen himself, numbers more than 30 OK Dinghies, probably the largest OK Dinghy fleet in the world.

More than 150 people packed into the sail store, a former movie studio, at Hellerup Sailing Club for the evening party, which lasted well into the small hours. The first ever OK Dinghy World Champion from 1963, Svend Jacobsen (DEN) compeered the evening, introducing a multitude of sailors and guests who paid tribute to Jørgen, presented gifts and told ribald stories of past accomplishments. It was an evening of great humour and fun, and many tall stories, with Jørgen ending up as the butt of many of the anecdotes. There is no safe haven if you are an OK Dinghy sailor – they all give as good as they get. There was also the added bonus of a Skype invitation that attracted calls from as far afield as New Zealand, Great Britain and Germany. 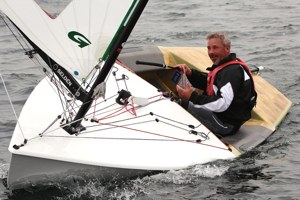 Gifts arrived from far and wide, including a specially branded Lindhardtsen beer, framed photographs, original paintings of OK Dinghies, a personal sail number of the year of his birth, 1945, and befitting an OK Dinghy event, copious volumes of alcohol. The Danish Association also revived an old tradition by placing a shackled chain around his neck to acknowledge the regatta leader.

On Sunday despite many sore heads and inclement weather, a clinic was run by Thomas Hansson-Mild (above). And of course Jørgen turned up and took part, hoping to learn something new and improve his technique. The shore session focussed on preparation and basic wind strategy, while the three hours session afloat focussed on boat handling and manoeuvres. 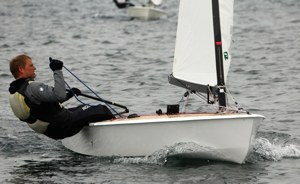 Jørgen Lindhardtsen is a classic OK Dinghy sailor. He is held in very high esteem by the whole OK Dinghy community, not just for his longevity within the class and his innate ability to sniff out every last shift and never to give up, but also for integrity on the water, which is valued by many as a guiding moral compass. His viewpoint is respected by the generations of sailors that often have to sail in his wake.

All in all the Lindhardtsen Classic was a fitting tribute to a classic OK Dinghy sailor – tenacious, resilient and modestly unassuming. Even at 70 Jorgen Lindhardtsen shows no desire no give it up. To give it up would be like giving up. He has spent almost his entire life sailing dinghies in pursuit of perfect speed. The winter seasons are now his enemy having suffered from back pain for the last few years yet remarkably it doesn't seem to affect his sailing. The pain is worse in the winter when he cannot sail. But his friends help to lift him into his OK Dinghy and when he comes ashore his back is better, even after having beaten people half his age in 30 knots. 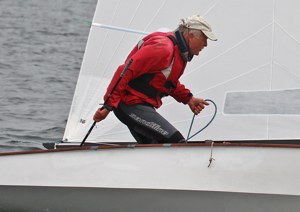 Eight years ago he was the first inductee into the OK Dinghy Hall of Fame. He stands head and shoulders above every other OK Dinghy sailor in many ways. If he ever decides to hang up his wetsuit for the final time it will be end of an era for the class, one that began in 1964. We all hope that time will not come anytime soon.