You are here: okdia.org > features > 15 return of the woodie

With the majority of OK Dinghy World Championship winners over the past two decades being production GRP boats, you could be forgiven for thinking that the home building roots of the class have long been forgotten. However this couldn’t be further from the truth.

Homebuilding had never gone away and going into 2015 is at its strongest levels for many years, driven by the knowledge that the top two boats at the 2014 World Championship in Black Rock were both plywood constructed home built boats, that anyone with a basic level of carpentry could build for themselves.

The original vision of the class was everyone being able to build cheap, fast boats at home using readily available materials. Following some simple plans it is possible to build a competitive boat at a fraction of the cost of a commercially available one. Most of the home builds these days of course use modern technology wherever possible, such as epoxy based resins and glues, but more are increasingly being built from a CNC cut kit, either supplied by a manufacturer or cut locally to supplied files.

The first CNC cut kit hull was produced in Australia about five years ago, but recently other designs have been developed in New Zealand and Denmark. So far nine boats have been built in New Zealand using this method in the last two years, and three are under construction in Denmark. It also allows newbuilds in various parts of the world traditional OK Dinghy building experience, and opens up new countries to the class, as long as plywood and glues are readily available. It is a it like putting together a giant jigsaw.

"At one stage there were 13 people watching us work and plenty of beer bottles stacked on the workbench. It was great fun building the first one together, a bit like the old days." 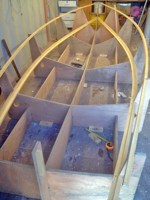 OK Dinghy World Champion, Matt Stechmann takes up the story and tells how it all began in New Zealand. “A group of New Zealand sailors had been talking about it for a while, but our hand was forced when the fleet started to grow quite rapidly here and we realised we didn't have enough boats for the demand. We had plenty of starter boats and a few really good boats but the middle had gone, pretty much all sold overseas.”

“January 2012 was when it really got legs. I was home from a stopover with Groupama and Steve McDowell, Luke O’Connell and myself sat down and kicked the idea around and made a list of changes we would make to a standard Icebreaker, as these were the hulls we knew. This was when Dan Leech became involved. Dan and I are mates from the same town, Lyttelton, in the South Island. He was a couple years behind me in the junior classes and a champion sailor in his own right having won many national champs in the R Class, which is a full development boat. He is also a qualified boat builder and naval architect so it was a no brainer he was the man for the job.” 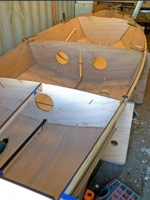 Dan Leech, who has designed a series of innovative sports boats, racing yachts and skiffs, explained the objective behind the project. “The idea was to come up with a cost effective way of getting more boats out on the water and growing the class. That is what this is all about. Plywood was chosen as the material as it is cheap compared to full composites. Personally, I think plywood is an excellent material to build a boat like this; it is a very underrated material.”

Stechmann continued, “Over the next six months emails were going here, there and everywhere and we kicked the ideas around. Dan did the first take on the construction and some renderings of the internal layout. These were refined a little by the group and then Dan and Luke worked on the CNC cut files. Luke runs The Water Cutting Company that he and I jointly own, so he’s a bit of a wizard on CNC files. Between him and Dan they refined the files and the first boat and jig were cut at end of July 2012.”

How did they arrive at a hull shape concept? Leech said, “No analysis was done. There was no budget for that. I have designed yachts with similar hull forms on the computer, so from that experience, I knew what shape I was after. Based on my other designs, I have a target prismatic coefficient that I try and achieve.” 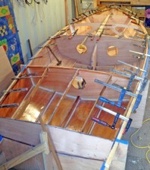 “As a group, we wanted a boat that was fast downwind, and I think this has been achieved, from the feedback I get from the sailors. These boats seem to get on the plane easier, and surf on a wave for longer.”

“Dan was fully into the concept so he flew up to Wellington to help build the first boat. It was really hard case. He arrived at 10.30 am on a Friday and we had pre-glued all the panels together so all the components were there waiting and Dan, Luke and myself went for it. Steve turned up after work and Steve’s Dad Jamie turned up and became the runner, zooming round getting bits and pieces as we needed them as we didn't know what was needed until it was needed. By 2.30 pm on the Saturday the first boat was ready for the deck to go on. At one stage there were 13 people watching us work and plenty of beer bottles stacked on the workbench. It was great fun building the first one together, a bit like the old days when projects like this happened. Steve’s was the first boat, then we built Luke’s boat and mine came a little while after, but we all helped build one another’s boats, which was really cool.”

"The idea was to come up with a cost effective way of getting more boats out on the water and growing the class. That is what this is all about."

The boats are built from a set of full CNC cut files for both the hull panels and the female jig. All it needs is some glue and tape to put it together in the jig so as long as the jig is right it can't go wrong, in theory. Leech said that building the boats with a CNC cut kit is a relatively simple process. “It means there is no marking the parts out and cutting with the jigsaw. It is just the matter of setting up the CNC cut female hull mould jig, pushing the CNC cut hull panels into the jig, then fitting all the CNC cut bulkheads and deck panels.”

“The general kitset plywood construction is pretty simple really, but I guess the time involved to get a nice paint finish is a challenge compared to a moulded GRP boat.”

Second overall at the world championship Luke O’Connell described how he got involved, “I got involved in building the boats because Steve and Matty had one drawn up and were building it in the factory were I work, and I had accidentally sold my old boat. I had planned to build one but not when I did. I sold the old boat three months before the nationals. So it was a rush to do it in the evenings so I could sail.”

I don't think it’s any different to my old boats. I set the deck gear and rake up the same as my last boat. Building the boat myself was the only way I could afford a new boat as I could cut it out at work and build it in the workshop. The weight of the boat was good; it has 4 kg of corrector weights in it.”

“They are not fully evolved and the later ones are better than mine. Mine was the second one built and built in a rush, so there are things I would change when I build another one. I really enjoyed building it almost as much as I do sailing them. My boat started off not going that well but I have done lots of sailing and tuning since I finished it and now I am really happy with how it is going.”

Stechmann said the shape they were aiming for was similar to the existing Icebreaker shape forward of the cockpit, while flattening out the aft sections a little. However, as it turned out there were no big changes as the tolerances left to play with were quite small.

He thinks they got it fairly perfect. “The initial testing we did against the standard Icebreaker certainly showed we hadn't gone backwards. We think the Leech boat has a slight advantage in marginal planning and also upwind in a sharp chop.”

His thinking was confirmed when the boats finished 1, 2, 3 at one of the ranking regattas in Napier where these conditions were prevalent. “Upwind they fell nice and stiff and we have put this down to panel stiffness in the bow. It was a real eye opener how much tension is required to bend the ply in the compound curve in the bow sections and how stiff this made the front half of the hull.”

However, he added, “We are looking at some refinements to what we have. All these things progress, even the boats we have built are all slightly different construction wise. You always refine as you go and improve.”

“We think you could make some subtle changes to the shape with the aft sections but this would require changing the files and rebuilding the jigs, so I don't think this will happen in the immediate future. We have made some changes to the construction as we have gone along, mainly to do with the side decks as the strip plank cedar curves on the side deck were edge glued but we had some problems with the early boat cracking along the edges so we now do this with two layers of 3mm ply overlapped which makes them pretty bullet proof. We also added another deck beam across the aft tank and forward of the cockpit for when you go forward to change rake.”

O’Connell concluded, “They are easy to build. I watched Steve and Matty build the first one then I built mine by myself. It’s the first boat I have ever built and I'm really proud of it, so maybe I should treat it a bit better.”

Stechmann said the big advantage of building the boats this way was the ease of doing so. “The CNC cut panels make it pretty easy. If you have some reasonable skills and some patience anybody could do a pretty tidy job of it. Speed wise they have their moments like all the other boats, but they do need a little more maintaining than a glass boat.”

Kit sets using Dan Leech’s CNC files are also available in Denmark. To date, nine boats using his CNC files have been built in New Zealand since 2012, with three more about to be built, as well as one in Denmark and two in Australia.

The wooden boat resurgence is not limited to New Zealand. Three boats are being built from a different design CNC kit in Denmark, and many other sailors are continuing the traditional approach to OK Dinghy sailing, by building boats at home. With a little bit of skill and thought, a competitive boat can be had for less than half the cost of a production boat. And the CNC process makes it very simple and more available. It’s worth thinking about

The Dan Leech CNC files are available to anyone to build their own boats. Dan can be contacting for pricing on dan@leechboats.com.